Wheeler’s Law of Reasonable Expectations dictates that if an author is well-known for his bittersweet romantic stories, his novels will follow along the same lines. ‘Nathan Burgoine’s Light, however, obliterates that law. And that’s not a bad thing. In fact, there is little, if anything, bad about this stunning debut, which makes my job as a reviewer both easier and more difficult at the same time.

Kieran Quinn is a gay massage therapist, but that’s where the stereotype ends. He also has telekinetic powers, which is good for our side. Bad for our side is that the enemy, embodied by Stigmatic Jack (leader of the Church of the Testifying Prophet) also has a telekinetic it can use for its nefarious purposes. During one eventful Pride week, Kieran and Jack square off for some monumental battles. Who wins? And what of Kieran’s lust for a hot leatherman named Sebastien? How about Kieran’s brother’s lust for Karen, his boss at the spa? And who is the Miracle Woman?

Burgoine answers these questions and more in a stylistic tour de force that is as much superhero story as it is a light romance (which, at its core, Light is–complete with HEA). What’s stunning about this debut is its assurance. In terms of character, plot, voice, and narrative skill, Burgoine knocks it out of the park as if this was his tenth book instead of his first. He, along with Tom Cardamone, has the considerable gift of being able to ground the extraordinary in the ordinary so that it becomes just an extension of everyday life.  Kieran Quinn is, indeed, a superhero (despite the fact that he hates the names the public gives him–Rainbow Man, Light, Disco?), but he’s a superhero who loves his cat, who blithers in the presence of handsome men, and who goes on failed blind dates.

Knowing Burgoine’s short fiction as well as I do, I was floored to discover his facility with action sequences. There are four encounters with the villain, each increasing in complexity and scope to the climactic final one, and all four were totally engaging and had me on the edge of my figurative seat. I was more confident in predicting the romance, which is written in a clever, light ‘n’ breezy manner with an undercurrent of danger. Burgoine’s dialogue , especially between Kieran and Sebastien, shines. It’s banter-ish without sounding forced–the kind of dialogue I always imagined happened in Jean Kerr’s house. Or maybe even Erma Bombeck’s. And Kieran’s voice is totally entertaining–that of a genuinely nice guy with just enough smart ass to give his observations some punch.

Burgoine’s prose is clean and focused, his characters are sharply defined, and his plot runs a fairly straight line–with one neat little twist–to its conclusion, which is immensely satisfying. What more could you ask from a debut? This is the difficult part of my job, where I’m supposed to come up with a negative or two to counter all the strokes. And I really can’t think of anything worth mentioning. Perhaps four or five books in, when he starts taking chances that don’t work , there’ll be something to point at…wait, maybe I found one: He could have written it so that it was easier to put down.

As far as negatives, that’ll have to do. 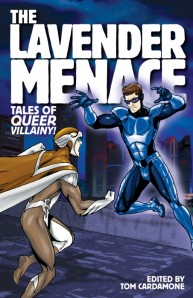 Everyone loves the hero, right? Especially those with superpowers, colorful costumes, sidekicks, and witty banter. Personally, however, I’ve always found those tortured villains more interesting: Lex Luthor or Mr. Myxzptlk over Superman, Doc Ock over Spiderman, the Joker or Penguin over Batman (except you were never sure about Batman–he’s my favorite). That’s why I was so excited when I heard about this book. Then I saw Tom Cardamone was editing, and my expectations tripled. Thankfully, nobody disappoints here, so no one dies at the hands of this arch-villain-critic.

Much has been made of the “outsider” kinship queer men and women share with superheroes, but where many would concentrate on the heroic aspects, most of the heroes in these stories are members of Leagues or Organizations, loosely knit governing bodies that put heroes with heat vision or super strength or flight or any number of super-attributes clearly on the inside. Thus, to get back to the outside, Cardamone has chosen to concentrate on villains.

A look at the cover and a cursory glance at the title would indicate these stories are overdrawn and over the top. While some of them are, a number retain a surprising subtlety.  The telepath in ‘Nathan Burgoine’s brilliant “Lesser Evil,” tips his way into a love affair with Aleph, implanting a suggestion that Aleph loves him. Burgoine’s portrayal of Psilence’s delicious guilt is both heartening and heartbreaking. And just when you think you have the ending figured out, he takes you another way which is simultaneously characteristic, yet uncharacteristic of his lovelorn villain.

Less subtle, but still effective, is the betrayal in Steven Berenzai’s “The Web,” which sees Daytripper falling in love with Arachnid, a fellow possible inductee into yet another Superhero League. At a pivotal moment, however, Arachnid tricks Daytripper and reveals himself as a villain, provoking a wonderful final battle that is satisfying on a number of levels. Jamie Freeman also turns in a wonderful performance with “The Meek Shall Inherit,” a cautionary tale that takes place in the futuristic Christian States of America as the Inheritor incinerates the religious bigots. Although this would seem to put him in the superhero side, revelations at the end put him squarely in the villain camp, no matter how much the reader would wish it otherwise. In doing so, Freeman asks some tough questions about the nature of good and evil as well as the grey area between the two.

But as I said earlier, everyone acquits themselves well in this collection. Marshall Moore goes all high fashion with “After Balenciaga,” which has the evil Couture bringing back designers from the grave, pitting Chanel against Dior to wickedly tongue-in-cheek effect.  Lee Thomas is his usual brilliant self in “The Third Estate,” incorporating some leftist sentiment into the villain Legion, who destroys corporations and executives, much to the dismay and ultimate betrayal of his partner, Curtis. The title character of Cardamone’s own “The Ice King,” first seen in Steve Berman’s criminally underrated queer spec-fic magazine Icarus, takes time out from freezing back-of-the-bar sex tableaux to reunite with an old college roommate he once loved. Also worth mentioning is Jeffrey Ricker’s “Scorned,” featuring Megawatt, a Hannibal Lechter-type desperate to regain his power and escape from his prison cell.

As if all this wasn’t enough, Rod M. Santos takes us clear over the top with “The Knights Nefarious.” This outrageous tale has a henchman named Muse trying to win the love of his master, Dr. Schadenfreude, by scheming to capture the good doctor’s arch-enemy, Captain Strategem, and presenting the hero to him on his birthday. He does so with the help of a rather motley crew of amateur villains: El Fantasma que Sangra (The Ghost Who Bleeds), a robotphobe named Armored Suit Man, a trenchcoat-wearing Flash Forward who opens his coat to expose a hypnotic psychedelic tattoo, Robigus, a Roman god who protects corn from blight, and Chocolate Bunny Boy, who can shoot chocolate rabbits from his palms. In an absolutely inspired moment that had me snorting ginger ale up my nose during the climactic battle, Stratagem puts an arm up to ward off Chocolate Bunny Boy’s attack, exclaiming incredulously, “You’re assaulting me with Easter candy?” Even my dogs were laughing.

You’ll find no better book of queer supervillainy anywhere. I can hardly wait for the next volume. Please, Tom, tell me there’s another in the works!