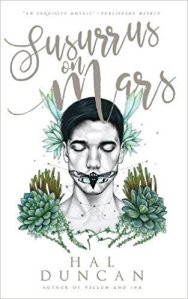 Susurrus on Mars, Hal Duncan’s latest offering from Lethe Press—described by the author as an “Erehwynan Idyll”—takes place on a terraformed Mars, in the town-state of Erehwyna. One day Jaq Cartier of Mars notices Puk Massinger (with his sister Ana), a recent arrival from Earth: love at first sight can still happen, even in the far distant future. And the story is truly idyllic: over the course of several weeks during a Martian summer, Jaq and Puk explore each other’s bodies and minds, while Ana discusses “pataphysics” (a branch of philosophy dedicated to studying what lies beyond the realm of metaphysics) with Guy Renart. Interspersed among the graphic depictions of sex on another world, and erudite discussions of philosophy and art, are digressions concerning the mythological stories, folklore, and botanical qualities of numerous plants: they may be native to Earth, but they still remember their classical origins as nymphs and young lads beloved of the gods, even after being transplanted to Martian soil. And whispering through all of this is the personification of a small breeze, the titular demigod Susurrus, not born of a goddess or begotten by a god onto a woman, but rather the genetically engineered son of the gods Ares and Zephyros: and as the gene-spliced child of Ares, Susurrus may in fact be the most Martian of them all.

This short—but dense!—work combines hard (and I mean that in every sense of the word) science fiction, Greek mythology, botany, philosophy, and erotica into—well, I don’t know what exactly. Susurrus on Mars is not an easy book to describe, nor is it an easy book to read (have a good dictionary handy—you’re going to need it). But Hal Duncan wrote it, so what did you expect? Duncan’s love of language is probably exceeded only by his love of beautiful men. And here he celebrates both: not only does he draw forth from the full bounty of English vocabulary, but he pushes the boundaries of those words, giving one the sense that they are reading a future English, a living language that continues to be slangified by future teenagers.

However, the dislocation in time works mostly backwards: Duncan’s intermingled herbarium evokes the distant, classical past much more than a typical science-fictional future. And his story is not only an homage to classical myths, with their numerous allusions to man/man love, but also to classic SF, and to Renaissance drama—as evidenced by the protagonists’ names: the one clearly evokes Burroughs’ hero of Barsoom, while the other that famous trickster of Shakespeare. Indeed, Duncan spends several pages describing the garb of his protagonists, their doublets, jerkins, breeches, et al: his heroes could easily be seventeenth-century swashbucklers. The nostalgic element, coupled with the sense that one has stepped out of ordinary time (for even a terraformed Mars still has a year twice the length of Earth), adds to the idyllic quality of this work.

Duncan’s novella, therefore, is not science fiction, mythology, erotica, or even narrative in any traditional sense: Publisher’s Weekly blurbs it as “an exquisite mosaic” on the front cover, and that metaphor captures the shiny, multi-faceted nature of this work. Each jewel-like scene is like a marker on a trail through the otherwise unfathomable landscape; and despite the difficulty in navigating the Martian surface, it is a journey worth taking.

Just One of the Boys – Gillian M. Rodger (University of Illinois Press)

Buy from University of Illinois Press

One of the voices I rarely get a chance to feature on this blog is non-fiction, especially academic writing. Now, this isn’t everyone’s cuppa, and it certainly doesn’t scream “beach read.” However, it does cast some legitimization on whatever part of the subculture is examined and is worthwhile even if that part is small.  In the case of Gillian M. Rodger’s textbook, it’s male impersonators close to the turn of the century.

Rodger does a great job in hitting the well-known performers of the day (Annie Hindle, Minnie Hall, Maggie Weston and Ella Wesner–pictured on the cover) as well as the secondary ones. Though much research material has been lost, Rodger uses what’s available to bring these women to life. We come to know their work, their private lives–as much, again, as we can–their public personas and what their fans are like.

For male impersonators had an important role on the variety stage (the forerunner of vaudeville), reflecting and sometimes redirecting the men in the audience. I found the fact they had a place in that society at all fascinating, so Rodger really won me over when she took these women and started placing their work in a larger context, professionally as well as socially.

And no detail is too small to capture her attention. I thought hearing about the sorts of numbers these women did as well as reading some of their reviews was particularly interesting, both giving a good deal of insight into the social conventions of the times. And her knowledge of booking and touring practices gave yet another dimension to the subject.

Just One of the Boys, then, is a smart, erudite exploration of female-to-male cross dressers for the time period in question, rescuing some marvelous bits of queer history from the dusty archives. 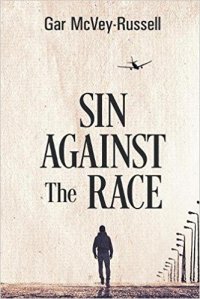 First novels are tough, especially ones that aim to tell a large story. Big stories usually require big casts, which can be difficult for even the most experienced novelists to manage. That Gar McVey-Russell does it pretty well right out of the box speaks highly of his skills, and by about a third of the way through, his tale gets its game and chugs along nicely, pulled by a solidly emotional core, and its ending satisfies with a vengeance.

Alfonso Berry, gay son of a city councilman and grandson of the state’s first African American legislator, is still grieving for his late cousin Carlton, an AIDS casualty. Basing himself on the queer street in the ‘hood, Alfonso has a lot on his plate. He’s going to college, thinking about coming out to his homophobic father, and wondering if his crush Jameel feels the same way he does. When the Huckleberry Community Clinic gets torched, not only does his father applaud its destruction because of its “negative influence” (i.e., needle exchange) on the neighborhood, he actively runs on a platform of exclusion and expects Alfonso to support that. But when Alfonso nearly loses his life in a police beating at a rally in support of the clinic, minds and courses change.

The last two thirds of this book are extremely compelling and had me totally involved. But it took a while to get rolling for me, mainly because the first few chapters are front-loaded with character introductions, most of which are only a few paragraphs long. The first four chapters alone introduce upward of twenty characters with little interaction that helps the reader distinguish between them. Many of these are incidental–especially those involved in the African Students Association–but it’s impossible to tell at that point who will become important, so I found it difficult to discern which ones I should pay the most attention to.

That said, there’s much here to enjoy. I particularly liked Alfonso’s father’s journey and the realizations he made during its course. Berry has difficulties not only with his son, but with the legacy of his late father as well as the local conservative reverend and a lesbian opponent he’d wronged during their last match-up. He has a lot of to atone for, but Russell manages to subtly change him from oppressor to victim, thus winning him some sympathy he didn’t originally have. The sub-plot between Alfonso and Jameel, however, is less successful because Jameel isn’t as clearly drawn as some of the other characters. I could never figure out why Alfonso liked him.

Of the many minor characters, Sammy, the former jazz musician turned shopkeeper, is a standout. Wise and unafraid to show his wisdom, he clearly dominates the neighborhood and becomes a touchstone as well as a sounding board for many of its younger members. I wish I’d seen more of Councilman Berry’s opponent Charlotte Hunter, who is only in a few scenes but makes her appearances memorable.

In the final analysis, however, the book is about Alfonso and his father’s relationship, and that’s where Russell shines. Their difficulties are about more than Alfonso’s sexuality, though that proves to be the initial flashpoint. Berry is disappointed in himself, his own life, and even his successes–taking all of that out on Alfonso.

Sin Against the Race is an extremely promising first novel, slightly unfocused but emotionally spot-on, and I’d enthusiastically recommend it. I think Russell’s next will really prove his worth, and I’m looking forward to what he has to offer.