I’m a huge fan of Marshall Moore’s work. When I heard he had a new novel called Inhospitable coming out soon, I had to get the ARC. I had no idea what it was about, and I don’t even think it had a cover then, but it went on my Kindle the second I got it. As the “A” in ARC stands for “advance,” I knew it would be a bit before it released, so I reluctantly put it aside, met some deadlines and read a few pressing books I’d promised reviews of, but this was always at the back of my mind. As serendipity would have it, I picked it up and finished it the very day it was available. And I was not disappointed.

Lena Haze and her Eurasian husband, Marcus, are expats newly arrived in Hong Kong from North Carolina. Marcus has inherited a property in the heart of the city but the can’t sell it due to the terms of the inheritance. He stays behind to pack up their American life and sends Lena to Hong Kong to oversee the renovation and turn it into a boutique hotel. She begins the project with the help of Isaac, the gay son of a local couple who are investing in the hotel. Her organizational skills, however, are nothing compared for her talent for sensing and seeing ghosts. As Isaac tells her, all buildings in Hong Kong are haunted, and she finds this true. However, her building has a more malignant, dangerous spirit than most. Moreover, there’s a reason for that. And she has to find out what it is to protect not only their investment, but their lives.

No one, and I mean no one, does disconnect and urban anomie better than Moore. He’s proven this both in short stories and his novels, Bitter Orange and An Ideal for Living, but the malevolence he conjures up in Inhospitable is at the forefront rather being a general feeling appended to his well-constructed plots. From her search for contractors to her preparations to meet her investors, Lena cannot be more lost. Yet, as untethered from her U.S. moorings as she is, she manages. She copes, and Moore does an admirable job of portraying her external successes as well as her internal failures. This is even reflected in the title. Her haunted hotel may be inhospitable, but no more so than her surroundings. Or her head.

Her sidekick throughout most of this is the son of her investors, Isaac, a Hong Kong resident on leave from a British university. His relationship with his parents is a difficult one, and not just because of his homosexuality. It’s also the subject of the novel’s most interesting twist. Her actual partner, Marcus, is only seen in the last third or so of the novel and although he may provide Lena some emotional support, he’s not much good with the spirits. In fact, it’s his surname that’s causing the haunting, but to say more would be getting into spoiler territory.

So, what we have with Inhospitable is a smart, neatly-plotted, and absolutely absorbing haunted house story the likes of which you probably haven’t read before. Non-traditional and quite satisfying, it’s the creepiest book you’ll read this year–but I mean that in the best way possible.

Drewey Wayne Gunn, professor emeritus of Texas A & M University-Kingsville, made a career of cataloging and examining Gay mysteries, pulps, and drama that were in danger of being forgotten.  Before he died, he wrote Orchids, Rosebuds, and Sweet Flags:  Reflections on Gay Poetry, doing the same thing for poetry, leaving us with a compendium of poetry that we can refer to as Gay, even if it had been written before Gay (as we understand it in the modern sense) became a thing.

So what kind of compendium has Gunn left us?  At its most basic, his book is a list; and lists are always idiosyncratic, revealing more about the list-maker than anything else, as Gunn acknowledges: “I remind myself that my taste is based on my experiences.  They have predisposed me to like certain poems and to dislike others.”  Gunn’s taste was, put simply, eclectic:  some Great Names from the Canon of Dead White Males appear, but lesser known names, both past and present, can also be found.  Of the 83 poets included, 46 wrote originally in English; the rest wrote in Akkadian, Hebrew, Greek, Latin, Italian, Spanish, French, Japanese, Russian, and Slovene.  And unlike most academics, Gunn did not disdain writings that were widely known and enjoyed by many people, equating “popular” with “pedestrian” or “lowbrow.”  Nor is any topic off limits:  subject matter ranges from the downright obscene to the romantic and elegiac.

Gunn begins his list ca. 1300-1100 BCE with the Epic of Gilgamesh by Sin-lēqi-unninni, briefly stopping in the Hebrew Bible (the Lament for Saul and Jonathan by David; 2 Samuel 1:19-27), wending through Homer’s Iliad, traveling through the Latin poets of Antiquity (Virgil, Horace, Ovid, Martial, Juvenal), before visiting the Near East (Rumi and Sa`di) and the Middle Ages (Dante and Hafiz of Shiraz).  So roughly 2500 years of human history, and literature, occupy the first forty pages.  The Renaissance and the Early Modern periods (Michelangelo, Spenser, Drayton, Marlowe, Shakespeare, Barnfield, John Wilmot) occupy the next twenty; and so, on page 60, we are already at the nineteenth century with Lord Byron, von Platen, Alfred, Lord Tennyson, Whitman, and Verlaine and Rimbaud.  The rest of the book (well over half) deals with the entire twentieth century, plus the beginnings of the twenty-first, ranging from T. S. Eliot, Roger Casement, Tennessee Williams, James Broughton, Essex Hemphill, to Hal Duncan, Brane Mozetič, Slava Mogutin, and Stephen S. Mills.

I should stress that this slender volume is not an anthology of Gay poetry:  Gunn occasionally quotes brief excerpts from the poetry he discusses, but rather each entry (as the subtitle notes) is a personal reflection about the context for each poet in his Gay canon, explaining what we know of each poet’s Gay life, and which poems have implicit or explicit Gay readings.  Gunn provides editions and/or English translations for the poems he examines; if multiple versions exist, he discusses their merits and then proposes his favorite.  When available and appropriate, he also provides supplementary materials such as recent biographies and/or critical works for each poet.  Closing the book is a short essay on the vagaries of translation (especially in regards to poetry), a full bibliography of all cited works and editions, and an index.

Lest you think that this volume is simply a catalogue of essays with pedantic, dry-as-dust commentary on the symbolism of rosebuds, I note that Gunn is not above dishing a little bit, for example remarking that when Lord Byron’s body was exhumed in 1938 it “was still in an excellent state of preservation” which provoked the discovery that “his sexual organ showed `quite abnormal development’” whereas Verlaine’s member was “short and not very voluminous” according to court records of the time.  Moreover, Gunn is not shy about sharing personal details, such as his regret at not hooking up with Allen Ginsburg when they met at the 1980 MLA Convention.

Literature is a conversation.  Every poet writes in response to whoever has written before him; when readers read their poetry, they in turn continue the dialogue.  Gunn engaged with each of the poets in his final work, at turns agreeing, disputing, approving or not of their poems; by so doing he encourages us to do the same. 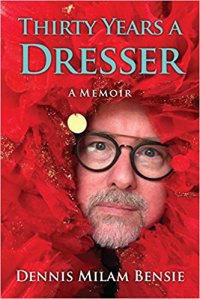 I thought I wanted to be in show business when I was in high school, but then I became involved in the Senior Play (“Mame” that year–something Bensie and I have in common). Too shy to try out for an acting role, though dying to, I worked backstage as prop guy and general go-fer. It was far too much work for the very fleeting reward of the cast party, so my stage career was derailed. However, Dennis Milam Bensie’s memoir of life in the wings, Thirty Years a Dresser makes it all sound so damn fun I almost got the bug once again. Almost.

Bensie’s anecdotes are wild and woolly shaggy dog stories he freely admits he’s exaggerated, though not by much. And they are hilarious. Thirty Years a Dresser provides plenty of laughs from the spurting blood vest in “Agnes of God” to the two hundred costumes required for “The Grapes of Wrath,” and Bensie writes about it all with equal parts love and loathing.

Most memoirs I’ve read are at least partially self-serving, but Bensie’s stands out as self-deprecating instead (as did his previous One Gay American). He never takes himself too seriously–his craft and his subject, yes, but never himself. Moreover, although his role in the proceedings is central, he never focuses on himself, preferring to keep the spotlight on his subjects.

And what subjects they are–from Rosie O’Donnell stories to less famous actors and even ones you even have to guess (but “played John Travolta’s younger brother in a blockbuster movie” is hardly tough to figure out), the backstage details come fast and furious. To take the smell out of costumes? Vodka and box fans. Who knew? Such are the tricks of Bensie’s trade, and he spills them all.

I thoroughly enjoyed this book and if you have even a passing interest in the theatre, either on or off stage, you owe it to yourself to pick this up and devour it in one or two sittings, as I did. Highly recommended.