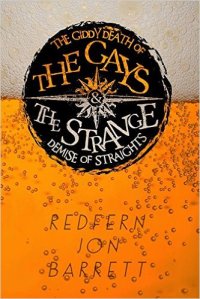 Set in Swansea, Wales, The Giddy Death of the Gays & the Strange Demise of Straights is an engaging and thought-provoking read. It’s a story about breaking free of restrictions — relationship conventions, geographical place, traditional gender identity.

The story has four POV characters: Caroline, Rutti, Richard, and Dom, although Rutti is the most powerful and colorful character, even if not the protagonist in the usual sense. From the beginning of the book Rutti animates the story with wit, insight and defiance. Zie uses gender-neutral pronouns as part of hir world view. There are twelve flashes into three points in the future, in which use of these pronouns (and the gender fluidity they represent) have become universal. It was immensely satisfying to see that at 80 Rutti is still triumphant, happy, and fully realized as hirself.

As the story begins, The Skyline — a shabby, mediocre nightcllub (although everything in Swansea is at least shabby if not squalid) burns to a shell. The nightclub doesn’t feature except for its burning — it’s a harbinger of change for the four heroes about to break free of the sullen boredom of life in Swansea, with its drinking, emotional violence, squalor, and merciless cold rain.

Caroline, Dom and Richard feel their way into a polyamorous relationship, and Rutti’s solo journey is catalyzed by a sweet, magical character with the stage name of High Hopes, though everyone just calls hir Hopes. And zie is exactly that for Rutti.

The present-time scenes are cleverly crafted to appear random, almost aimless, slow to take shape, but always true to charming chapter titles like The Pet Fundamentalist, Beware of Rooms with Plastic Plants, or Off-White Feminism and Low-Fat Fascism.

Frankly, I didn’t much enjoy the jumps into the future, but as the book unfolded I realized they were needed to give the story its shape and meaning, its sense of destiny. They are written in a cool third person POV (with the telling exception of Rutti’s), in contrast to the first person chapters in the rest of the book. It took some adjusting to stay with them.

Is The Giddy Death of Gays & the Strange Demise of Straights a manifesto for polyamory and gender fluidity, or a quirky, well-conceived, interesting and optimistic read? Yes. And after you read it I promise you’ll want to talk about it with your friends, which may be the greatest endorsement of any novel.

The prolific Lambda Literary Award winning Yolanda Wallace strikes again, this time using coastal Maine as the backdrop for romance. Like her fellow Bold Strokes authors Carsen Taite, D. Jackson Leigh, Cari Hunter, and others, she proves herself most capable and reliable, coming up with fully-realized characters, interesting conflicts, and nicely-turned plot elements.

Ashley (Shy) Silva needs to get out of South Boston for her own good, so her uncle sends her to Portland, Maine to work on a lobster boat captained by lovely Jake Myers. Jake takes a chance on the “greenhorn,” finding her surprisingly responsible and eager to learn. She also finds Shy attractive, and the feeling is definitely mutual. Shy has her own reasons for not wanting to get romantically involved, but Jake has a few deep, dark secrets of her own. Can they both get past their pasts and concentrate on building something for the future?

Since this is a romance, I think we all know the answer to that one, but Wallace puts enough obstacles in the way to keep you guessing until the very last. And far from being contrived, the difficulties spring very naturally from their characters and situations. In particular, I found the origin of Jake’s PTSD timely and logically motivated. However, Shy’s unwillingness to let go of her family’s dictum not to date outside her ancestry is also compelling.

Shy’s additional problem is an inability to let go of Lucy, her old “girlfriend” from South Boston. Some of the best scenes of the book are the awkward ones when Lucy comes to visit Shy in her new surroundings and tries to erase any gains Shy has made by being away from bad friends and worse habits. You know right from jump this girl is a problem, and she proves that in spades.

Wallace, in fact, builds her characters with such comfort and ease that you feel as if you know them within only a few paragraphs. She has a terrific eye for detail and a style that is unpretentious and uncomplicated, yet strikes all emotional chords–the hallmarks of a true pro. And she brings together all the elements for an immensely satisfying conclusion.

Love’s Bounty is the first Yolanda Wallace book I’ve read, but it certainly won’t be the last.

One Tuesday afternoon in April 2005, a man named Robin takes the day off from work and attends the exhibit “MOTIONS OF THE MIND:  The Renaissance Portrait and its Legacy” at the Metropolitan Museum of Art in Manhattan.  For approximately two hours he will focus his attention upon five portraits by John Singer Sargent, Sandro Botticelli, Albrecht Durer, Diego Rodiguez de Silva y Velazquez, and Hans Memling:  these five paintings date from the mid-fifteenth to the end of the nineteenth centuries, and depict a boy, a young man, a self portrait, an African slave, and an old man, respectively.

Each portrait is a story, of course, and Patrick E. Horrigan introduces each section of Portraits at an Exhibition with a story involving the model depicted, and/or the artist, or even an art historian or modern artist associated with each painting.  These stories assume different forms:  they range from the blank verse soliloquy of Pareja (the subject of the portrait by Velazquez) to the medieval prayer of the Old Man painted by Memling to the imagined communion of the art critic Yukio Yashiro with the Botticelli portrait (which involves his contemplation of the lives of model and artist).  As Robin gazes upon the portraits, reads the museum’s placards, and imagines their stories, he divulges his own story to the reader:  34 years old, a graduate school drop out, current gallery worker, he comes to the exhibition to take his mind off of a distressing encounter at a sex club the night before.  After an unsafe sexual encounter, the specter of AIDS hangs over him; but taking in the portraits of long-dead models, painted by long-dead artists, may not be conducive to escaping thoughts of mortality.

These stories are not alone in interacting with Robin’s story on this afternoon.  There are other patrons who view the paintings, but only one who directly interacts with Robin:  Bernard, a former monk, now a therapist, briefly speaks with Robin; as he examines the exhibit we learn his story as well.  Is their meeting meant to foreshadow Robin’s future?  Bernard—who knows that he is HIV+–accepts Robin’s e-mail address, but there is no certainty that they will either begin a professional or personal relationship.

The only other character to speak to Robin (“The museum will be closing in ten minutes”) is Dora, the fifty-year old African-American museum guard, who is reading The Portrait of a Lady by Henry James while on duty.  (Even the non-paintings mentioned in the text are portraits:  Robin happens to be re-reading Portrait of Dorian Gray.  I half-expected a reference to Modest Mussorgsky, but alas, no.)  Dora also reminds Robin “Not too close to the painting please,” a subtle reminder that while much of the appreciation of a painting is internal, experiencing a painting or work of art is also a physical experience, as it involves the senses—sight especially, but it can (rarely, I grant you) also involve smell and touch.  Viewing a painting in a museum or gallery also involves entering into the painting’s “space,” and almost interacting with it as one would a person (but far beyond the normal constraints of time and space).

Still, this novel is very much an internal, cerebral experience; as most of it comprises Robin’s and Bernard’s reactions to the artworks, and Dora’s reaction to the novel, it remains at heart an internal conversation between art and viewer—but an extended conversation that we are privileged to overhear.

Just in time for summer I found Mason Stokes’s delightful Saving Julian. Though often a serious consideration of the place where desire, family obligation and fundamentalist religion meet, Saving Julian is also a funny, brisk tale of gay men finding love and romance in unexpected places. The titular hero is a sardonic rent boy with open contempt for the closeted old gents from whom he makes his living. Julian’s roommate, Aaron, watches in amusement and amazement as he bounces from one sad sack to the next, finally landing in the arms of a conservative Christian leader who actually issues him a contract, specifying that the jaded young man will act as—and only as—luggage lifter and nonsexual masseur on the Reverend’s next business trip. The Reverend is obsessed with male bonding, but no s-e-x!

The Reverend ends up getting busted anyway, confessing to the microphones, denying everything and hiding behind his own peculiar gospel of men fulfilling “homoemotional” needs. Julian gets fifteen minutes of unwanted fame, and at this point, Aaron decides to go underground, enrolling in one of the Reverend’s gay conversion therapy workshops in order to really nail the man. So begins a lively game of get-the-hypocrite. So, too, begin various games of attraction, as some workshop members, including Aaron, find one another, shall we say, distracting? Ultimately, as Aaron and company move toward exposing the Reverend and getting their very creative revenge, even the Reverend’s wife and son get drawn into the–ahem!–action.

Saving Julian is funny, especially in its conversion therapy scenes, and the plotting is zany, but Stokes also raises questions–through the actions, feelings and pronouncements of the Reverend–about what men’s needs really are. We nudge and wink over all the talk of “homoemotional needs,” but we all know what it is simply to be held by another man and feel the warmth. The pseudo-psychological double talk makes sense, and the struggle of the religious man who just wants some earthly succor becomes compelling and real.

I will not give away the delightful–and in some ways touching–resolutions. Suffice to say that they are happy for most, melancholy for a few, and satisfying for the reader. Saving Julian is a terrific read for summertime or anytime, and perhaps an essential read, given how tensions keep flaring between fundamentalists, who maybe just want some male warmth, and gays, who maybe just want the same thing.