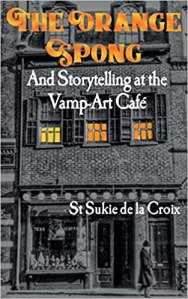 The above quote is from the introduction to The Orange Spong by St Sukie de la Croix. The titular “Orange Spong” is Ra, the Sun, who, it turns out, is the god of vampires. For de la Croix’s vampires can walk about the Roaring Twenties in broad daylight, and need not fear garlic, crucifixes, or holy water; nor do they drink blood. So the vampires who frequent the Vamp-Art Café are nothing like the bloodthirsty revenants of Stoker’s Dracula or F. W. Furnau’s Nosferatu, eine Symphonie des Grauens (which, by the way, they disdain as libelous lies). Rather, they have more in common with the sophisticated and cosmopolitan immortal characters of Anne Rice—minus the blood-drinking.

So what do vampires do if they’re not drinking blood, either indiscriminately, or specifically of the evil doer? In general, these vampires instead confer immortality upon mortals by sucking out their fear of death; specifically, the denizens of the Vamp-Art Café meet every night to tell stories from their centuries-long existences. The Orange Spong records one such evening, with the seven pieces therein flanked by eight interludes “Back at the Vamp-Art Café,” which introduce each of the storytellers. Many of the speakers are ex-pats from Europe, meeting in this Chicago salon, paralleling the similar Parisian salons populated by contemporary American artists.

Although some of the vampires in this novel are centuries, if not millennia, old, most of the stories fall during the fin-de-siècle period of the nineteenth century or immediately preceding/following. One notable exception is the final story, “In the Beginning,” which ironically closes the collection of stories with the vampires’ origin story—an Adam and Eve story retold from a vampiric point of view.

Despite all of the historical name-dropping throughout the collection of stories (e.g., the Brontë sisters and Lewis Carroll), it is clear from the quote above that vampires are not part of what we consider “normal” or “polite” society—they exist always on the fringes of it. Two stories (coincidentally, my favorites) in the middle of the collection especially deal with outsiders: “The Other Side of the Door” and “The Woman in the Puddle.” The first describes the love between a ventriloquist and his dummy; the second describes the journey of a man who initially flees the woman he sees reflected in water, until he finally gives in and follows her. Both stories also explore the theme of transformation, as the ventriloquist’s dummy becomes a vampire over the course of the story (for even nonhuman objects can confer immortality in de la Croix’s milieu), and the protagonist of the latter also transforms—not into a vampire, but something distantly related.

Regardless of whether you are a vampire purist or not, these stories will entertain you, while they titillate you with their strangeness, provoke you with their ideas on the nature of art or immortality, or amuse you with their unusual historical details. Certainly you will never look at a head of lettuce the same way again.

The title raises some questions for me right away. Is the period at the end of each word supposed to indicate emphasis, as one does in Social Media Shorthand these days, or is a more subtle categorization at work here? And what of the order? Are these attributes in order of importance? Having been two of three of these, I can certainly relate to Randy Fair’s experience and celebrate his commitment to gay activism as well as maintaining a career in secondary education instead of bailing out on one or both somewhere along the way. Southern. Gay. Teacher. is an interesting look back at that career with the appropriate lessons for all.

Fair taught in Atlanta during the 1990s and so, saw many changes and was involved in the March on Washington. All of these experiences are reflected in his memoir as well as his classroom. Any teacher in the game has their share of war stories, and Fair is no exception. From stunning successes to shattering failures, we’ve had them all, and they’re all in these pages – as are administrators and fellow teachers running the gamut from lovely to loathsome. Some are out, some are not, some are straight, but they all have an opinion on the school GSA.

He includes some biographical information by way of introduction, but once those chapters have concluded and his academic career begins to take off, we tend to lose the personal side of this equation. We know, for example, that he attended the March on Washington and understand it affected him deeply, but we never really see how. We also never see the romantic side of his life, and you might well say that it’s none of our business and has nothing to do with the subject of being a Southern gay teacher. You might be right. But its lack is noticeable and as a result, sometimes the narrator seems more dispassionate than he is.

That said, there aren’t enough of these memoirs on the market – stories of gay men and women not living in safe urban enclaves–if anywhere is safe these days–and fighting for respect for themselves and others on a daily basis. Teachers like Randy Fair are where real change starts, and we should all be glad to share in his experiences, maybe taking a bit away to use for ourselves tomorrow.

One of the reasons I find genre lit so interesting is that many forms follow such a strict formula, you’d think readers would weary of knowing just where the peaks and valleys fall, and start playing “spot the potential obstacle” early in the plot. But they don’t. Fans of genre lit, be it romance or mystery, are more interested in process than outcome. The outcome is always predetermined. That doesn’t mean you can’t change the ending up somewhat, but the love must be won and the mystery solved. How you get there, however, is your business. So, plotwise, Jenn Alexander’s Home has few surprises – but the journey is full of off-road wonder.

Novice chef Rowan Barnes moves from her hometown of Portland to a dream job in Texas, but things are less than ideal. She isn’t doing well on the job, and she isn’t all that wild about Texas. She misses her family and friends, and she really isn’t sure she can cope. Enter Kate Landreth, local cattle rancher. The first time Rowan picks up the order for the restaurant at Kate’s ranch, the fire is lit. But Rowan is hesitant to enter a relationship when she’s not certain she’ll stay. When she gets fired from the job that brought her there, she has to make a tough decision.

If the peaks and valleys aren’t plain enough, there’s also Kate’s father, a crusty old rancher permanently sidelined by a horse accident, reluctantly fading into the background as his daughter assumes control of his ranch. You can almost hear the scenes clicking into place as these characters ride their emotions to the ending. And although that sounds cold and somewhat cynical, let me assure you those characters are so well-drawn that you’ll be involved no matter how many times you’ve been down that road. Rowan is just the right balance of adventure and regret, and Kate is a stabilizer for both Rowan and her father – so much, in fact, that you wonder how she will get her needs met. By the ending, however, that becomes apparent.

And that ending… It’s so tempting to end with a wedding. It’s expected and natural, and what better way to celebrate the love that’s struggled 264 pages to bloom? Had that been the route Alexander had chosen, I wouldn’t have minded. I’m not heartless. I cry at weddings, and I probably would have at this one, too. But she does something else; something unexpected that lifts this into a different realm. It’s certainly a happy ending, so the outcome is satisfied and maybe you will have seen it coming. I didn’t.

Regardless, Jenn Alexander’s “Home” is a deft romance that never drags or wastes your time. The characters are all great, the dialogue is natural, and the cover is lovely and evocative. What more could you ask of a summer read?