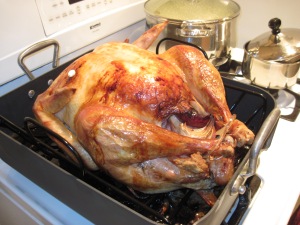 Out in Print is taking the week off to cook for our dinner guests, but we would like to take this opportunity to thank all of our readers, followers, groupies, and hangers-on for their support. We will return next Monday with guest reviewer Lloyd A. Meeker’s review of Ken Shaklin’s “Fucked.” We wish you a wonderful holiday! 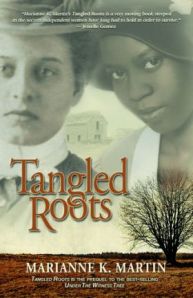 I usually snap up whatever Bywater Books comes out with, and I have been exposed to some amazing authors this way–Hilary Sloin, Bett Norris, and Jill Malone among others. So, I was surprised when I received this prequel to Marianne K. Martin’s Under the Witness Tree, which managed to escape my attention. I’ve since added it to my TBR list, which in itself has grown to the size of a small novel, but Tangled Roots is a standalone that is sure to please.

Addy Grayson is a matriarch raising her granddaughters, Emily and Anna in early twentieth century Georgia, but the trials that she endured during the Civil War have lingering results that filter down to her charges–especially as Anna becomes best friends with the servant’s daughter, Nessie. The girls must cope with prejudice, Anna’s nursing career and goals, her involvement in the suffragette movement as well as their sexual awakening and attraction for each other.

Martin’s greatest gift is in her sharply detailed and altogether convincing characters. Addy Grayson’s strength and indomitable nature are palpable, and she is the glue which holds the family together. Anna is also finely wrought, as is Nessie. Their actions, their dialogue, their interrelationships with each other, are all absolutely true to their characters, and they never strike a false note. Her Georgia setting is evocative, and Martin does a wonderful job of portraying the racial and political attitudes of the time period.

So why am I so frustrated by the brevity of this book? Partially because Martin creates such a terrific place to be that I never wanted to leave it. This book, only 208 pages, could be half again that long and still keep my attention. The suffragette stuggle alone could have carried the additional length, never mind any additional exploration of Anna and Nessie’s relationship. But perhaps Under the Witness Tree has those bases covered.

Nevertheless, Tangled Roots is an amazing portrait of two women caught up in the social and political strife of their time, as warm and real as it is engaging. Highly recommended. 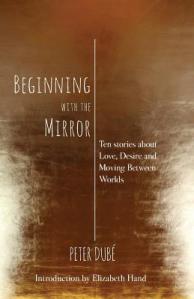 Whether walking alongside surrealist poet Rene Crevel (Subtle Bodies), forging his own fictional path (The City’s Gates), or approaching life as recipes in a grimoire (Conjure: A Book of Spells), Peter Dube’s work always provides a literary perspective that carries weight and importance, dazzling his readers with his facility with language and his ability to straddle the line between reality and dream state. The ten stories comprising Beginning With the Mirror mine much the same territory to marvelous effect.

Though more conventional than Conjure, conventional is a relative term as applied to Dube. The first four stories ground the reader in Dube’s approach to storytelling, linked by the fact that they’re all about the elements: “Blazon” (fire), “Tides” (water), “Funnel Cloud” (air), and “Furrow” (earth), their narrators recalling childhood incidents which continue to haunt their adult lives. But no matter how well-written, a quadriptych does not a book make, and Dube has other tricks up his sleeve.

Everything here has something to recommend it, be it the style, the metaphor, the thought, or an admiration of the rhythm of the language. Plot? Yes, but always secondary to character and voice. Bones to carry their flesh. But when Dube’s characters move, they strike sparks–as in the violent and twisty “Needle,” where Drake recalls a brutal affair with Blue as he’s getting a tattoo. What that tattoo says is as surprising as the ending. Brilliantly mean and absolutely fascinating. I also enjoyed the quiet “Drifts,” which sees love between boys from two rival tribes as our civilization morphs into one far more disconnected than the current incarnation due to a true extinction level snowpocalypse, as well as the Poe-inspired “Corvidae.”

But the most delicious of all these morsels, “Vision,” has a man named Cam attending the death watch for close friend Dean, who is convinced–in his painkiller fog–that demons are coming for him. Transitioning effortlessly between the real and the fantastic, Dube creates their Venn diagram and stakes out the territory in the middle as his character’s point of view. Even at the end, you won’t be sure what the truth of the matter is.

As with Dube’s other work, a close reading will be a rewarding one. I have always enjoyed his palette of language and the way he polishes his extended metaphors until they glisten. These ten stories leave you with much to think about as well as admire. 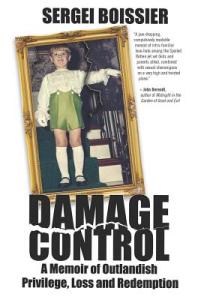 Toward the end of Sergei Boissier’s memoir, he mentions a particularly odd physical service his domineering mother had her lapdog  perform on her–in front of her children yet, and I wondered, “Do I really need to know this?”

The grown-up Boissier is a psychotherapist, however, so for him every nuance and particularity of Dollsie, nee Dolores, his Cuban born Social Register aspirant mother, must be brought out and aired. If not, how can he possibly be “cured”? This unique and remarkable book itself is the cure, and so we readers are made complicit in the procedure. Which brings up an entire set of possibly unanswerable questions about what it is we do exactly when we write a memoir, what are the expectations we have and how are they met; and, as importantly, how we interact, and what we do precisely when we read such a memoir.

But first the book: it is compulsive reading. It is also well written. For the most part, scene after scene is prepared for, laid out, and then limned to a climax, and onward we go to the next excess, the next scene of folly or sheer temperament. Boissier’s own life is there, in full detail, and eventually so are those of his older brother, younger sister, and his stepbrother. But the star of the book, the overriding presence, is his mother. Books like this are needed if only to show that people like Dollsie do actually exist and not just managing concentration camps, or as wardens in prison schools. They exist on all levels of society, and in this case, when their enormous ego is allied to a great deal of beauty, charm, breeding and money, they also exist at the highest levels of society, where they are free to indulge themselves at their most twisted and perverse.

The author attempts many times to get at what it was that drove this woman who then never ceased to drive her children, and who managed to drive and then drive away her husbands and lovers. He gets into her past in Cuba, the life of privilege wiped away by Fidel Castro when the wealthy were forced to flee their country. He delves into her own family history’s oddities: how when she was a child, she often traveled with her nanny and her father’s mistress, while her father traveled with her mother. More than a single generation of official hypocrisy helped form this formidable woman, and Dollsie learned early on that if she didn’t take charge utterly that she too could end up like those cast off concubines and those long suffering saint-like wives who were her models while growing up.

I was reminded of the heroines of nineteenth century novels: Becky Sharp, naturally, but even more those morally dubious heroines of Spanish literature by Perez Galdos and Alarcon, those Dona Perfectas and La Regentas. Even though her theatres of sexual war were 1960’s venues like  Serendipity and the Peppermint Lounge and not some cathedral town or royal court, Dollsie left no stone unturned and even fewer un-thrown in her precipitous rise to what she had always expected should be her natural milieu. So millionaires and heads of state, couturiers and industrial magnates all had to kowtow or fall beneath the unceasing wheels of her personality, grinding out her inexorable rise. Speaking of one of her recent social conquests she lectures young Sergei: “You ‘d have to be hiding in a cave in Siberia not to know him.”

But such a rise when your talents are realistically few are perilous indeed and as a corollary, everyone around Dollsie also had to be impeccable in every way. Her first, not nearly perfect enough or ambitious enough husband, Sergei’s father, soon fell out of the picture as Dollsie tumbled ever upward, and while Boissier’s older brother was the perfect macho, polo-playing, hooligan male,  sensitive and gay young Sergei was his opposite in every way. He soon became the target of Dollsie’s greatest bouts of improvement, all of which were pretty much torments to him and form the bulk of this memoir.

But if Boissier is expert at dramatizing his mother and family’s life, he’s no slouch with his own : “The first day of school was a disaster,” he tells us, “And pretty much set the tone for the next nine years.” If he enjoys camp, he’s pulled out for doing girly arts and crafts, not canoeing. If he hates a boarding school where he is bullied, he’s stuck there a perennial victim. As a reader I wanted to yell, “Get a grip, kiddo! Kick ‘em in the nuts!” But I wasn’t bullied, so what do I know?

Despite everything, including the terrible inconvenience of being gay and coming out, he does survive. And he survives his mother too, who ends up dying of cancer in a long drawn-out almost comic-tragic manner. Ending up with Boissier writing, “And here we are at the end of her life, making polite conversation, the two of them (mother and brother) trying to build me up and make me feel good on my birthday…For we always have been a family that thrives on chaos and crisis. That’s when the best comes out in each one of us making us feel like knights in shining armor coming to the rescue … ” Well. Maybe.  And he does end up happy at last, a single parent of a lovely adopted girl.

When we read such books with such avidity, are we in fact encouraging more of them? I have to wonder. Or will monsters exist and need to be written about no matter who reads what? Maybe we should just forget about the philosophizing,  get a box of chocolate bonbons and a heart-shaped satin pillow to lie our head upon, and enjoy.