I don’t read YA much, except occasionally for Out In Print. It’s not because I don’t like the genre–several authors such as Jeffrey Ricker, Alex Sanchez, and Leslea Newman usually strike some sparks that I respond to. I just find myself reading other things. However, I’m all about trying something that goes above and beyond the ordinary, so when I received Bridget Birdsall’s Double Exposure, about an intersexed teen basketball star, I was anxious to dive into it. And, with one reservation, I largely enjoyed it.

Alyx Atlas, an intersexed fifteen-year-old bullied out of her hometown in California, moves to Milwaukee with her recently-widowed mother and tries to make a new start of it. At first, all is fine. She makes the girls basketball team and is beginning to put it all together when she runs afoul of fellow player Pepper Pitmani. Pepper discovers Alyx’s secret and decides to go public with it, threatening the playoff chances of the team as well as Alyx’s new life.

The positives in Double Exposure far outweigh the problematic. Birdsall does a terrific job of voicing Alyx, sounding like a fifteen-year-old rather than a thirty-year-old writing a YA book. That alone sells the book for me. Many YA authors lose their credibility instantly because they are unable to achieve this, but Birdsall makes it look easy. That she does so without using slang that immediately dates the book is even more remarkable and ensures a much lengthier shelf life for the novel.

And you certainly can’t fault Birdsall’s command of character. Alyx is complex and three-dimensional, as frustrated with herself and her secret as she is determined to be who she needs to be. She is the glue holding the book together. Her mother is somewhat of a cipher, but her uncle Grizzly turns in a great performance as a biker polar bear. And Birdsall also knows her basketball, weaving that thread all through the book from the first time we see Alyx in Milwaukee.

All those pieces in place, it’s a shock that the major plot complication telegraphs itself from the moment the team becomes eligible for the playoffs (and even before). That it comes as a surprise to any of the characters, including Alyx, undercuts their credibility. And then, nearly as soon as it has been raised, it simply goes away and doesn’t appear to have been a serious obstacle at all. As savvy as Alyx is, she should be preparing her defense for it from the get go. And by eliminating the threat before it really has legs, Birdsall misses some dramatic opportunities that could have made the ending even more worthwhile and heartfelt than it is.

Nevertheless, Double Exposure is well worth your time and certainly recommended for anyone who enjoys well-written, timely YA.

In fact, the range of treatment in addressing the power differential between upstairs lords and downstairs lads became much more interesting to this reader than the sex scenes, since sex in its graphic detail hasn’t changed all that much for men like us in thousands of years, while notions of equality, power and privilege have undergone drastic evolution.

Some of the story memes were familiar — and essential for the theme of the anthology. The first story, Dale Chase’s The Maze, featured the classic aristocratic man stuck in a loveless marriage, discovering the virile gifts of his insatiable, rough-mannered gardener.

Other stories were surprisingly cold and cynical, and I was intrigued that all but one of these were told from the servant’s point of view. Some characters were merely opportunistic or manipulative, as in Brent Archer’s Seducing the Footman or Salome Wilde’s Booting. The most chilling, however, was Michael Bracken’s tale of a butler’s calculated theft and blackmail, Mutable Memories.

Of the romantic stories, three stood out as exceptional. Xavier Axelson’s short piece Finsloe was the tenderest and sweetest romance. In the back matter, Felice Picano’s piece Folly’s Ditch is described as extracted from a longer work, which makes sense. Although it certainly stands on its own as a story, it implies more untold than told — an almost dream-like tale of a young actor turned prostitute recounting to his unseen and unnamed benefactor how he came to be working in the whorehouse where they met, and from which the benefactor has rescued him. Rob Rosen’s Bohemian Rhapsody features an artist, a magical, romantically wild character who sweeps into an aristocratic household, paints a portrait and disappears, leaving the household changed forever.

So if you enjoy erotica set in Edwardian England and the gilded age in the US, you’ll enjoy this collection of stories about upstairs lords and downstairs lads — and how they negotiate the differences in their, well, positions.

Reviewed by Lloyd A. Meeker

That Door is a Mischief – Alex Jeffers (Lethe Press) 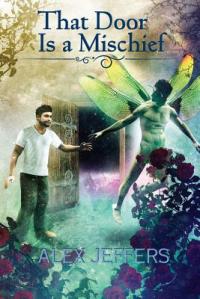 Writing about supernatural creatures and events has its own peculiar challenges. Beginning writers know that the biggest hurdle is trying to inject humanity into those creatures, and that’s where they almost always go wrong. Humanity cannot be injected into or imposed upon characters; it has to spring organically. The reader has to see it, feel it, and know it. Having read much of Alex Jeffers’s previous work, I knew that wouldn’t be a problem for him. That Door is a Mischief may have one foot planted in Fairyland, but it has a very human heart.

Liam Shea is a fairy–the kind with golden eyes, green blood, dragonfly wings,  and an adverse reaction to iron. Gay? Well, he might be that as well. His dads, now split up, definitely are. Through an episodic series of linked short stories, we follow Liam from childhood to adolescence to what might or might not be death as he finds love and family and walks between fairyland and our world.

The first three installments: “The Wild Fairy,” “The Ordinary Boy,” and “His Dads” lay the foundation by exploring Liam’s origins (a baby who died during birth but was switched out with a fairy changeling) and his difficult adolescence due to any number of differences distinguishing him from his friends. One might assume the book continues to be an interesting exercise into fantasy. With “The Changeling,” however, another far darker dimension opens up. Liam’s fairy puberty results in a type of pon farr, and his sexual awakening turns both polyamorous (he mates with both a male and a female human who have been turned out of the fairy world for some transgressions) and violent as the male dies and his body deposited through the doorway into fairyland.

From here on out, Liam straddles the border between his world and ours. Along the way, he falls in love, marries, divorces and remarries a man who bullied him as a boy, finds himself a pornographer as well as a gardener, takes care of foundlings society has washed up on their doorstep, and becomes a frequent visitor to the other land, which seems to repel him as much as attract him. I tried to pull a paragraph or two from the sections describing these lands but found they required context for their power. That said, Jeffers has a remarkable talent for setting that otherworldly scene. His prose is literary yet accessible and not pedantic.

More importantly, his characters never become caricatures. They never lose their essential human qualities, so they never seem less than universal. And he never loses sight of his characters. In the last installment, “His Husband,” the number of offspring by marriage and/or relationships threatens to overwhelm, but Jeffers reins it back just in time, delivering a finale as dramatic as it is satisfying. That Door is a Mischief is a remarkable read full of magic, wonder, and terrible beauty. Highly recommended.

Nothing is more difficult than critiquing memoir, except perhaps writing it. It doesn’t matter that it’s called a nonfiction novel, it’s the messy, detailed particulars of someone’s life as well as the lives that intersect with it. How can you say the characters are thin or their actions aren’t properly motivated when the prose is more reportage than invention? Luckily, Elliott DeLine’s Show Trans is good enough that the decision can be avoided.

One of my good friends, the late trans activist Matt Kailey used to tell me that transitioning, like coming out, doesn’t fix everything wrong with you. It may help reconcile many issues and feelings, but it may also raise others that have been previously hidden. And, I think, this comes across quite clearly in Show Trans. In addition, transitioning brings up new wrinkles, such as fetishization (if it’s not a word, it should be). Although DeLine’s sexual exploits are on display here, the focus is on his compulsions and his boredom as well as his restless search for a way to make it all fit together.

Is this, then, a bleak book? Well, yes. But it’s bleak in the most universal of terms. I don’t think anyone reading this blog hasn’t been down this path. DeLine shines a light on that dark place we have all found ourselves in just after coming out/transitioning. The relief is over. The weight has been lifted. Most of our fears of acceptance or rejection by our friends and families have either been proven or not. What, then, takes the place of those things? What rushes in to fill that vacuum? Being human, doubt. Have we done the right thing? Why aren’t we happier–or in today’s parlance, why hasn’t it gotten better? Can we go back? Should we? In one of the most affecting parts of the book, DeLine does just that. He dresses up as a girl, fake boobs and all:

In the mirror, I saw what perhaps, once, had been my worst fear: I was a sexually attractive girl. In fact, I was a little taken aback. I’d never tried to look sexy, except as a boy and a man, and those were very different matters. The hairstyle complimented my features much like I had suspected. I was impressed with my figure. I actually had an ass. My stomach was quite toned. I was getting aroused. Was I a transvestite? The urge to do this had come on rather suddenly and had been urgent. Why now? Why was this so gratifying? Did I need an answer? Why over-think it? I took off the shorts once more. Slowly, the rest of it came off and naked, I was a boy again. Female-to-male crossdresser. Why not? I put all of it back in a cardboard box that I hid in my closet. I got back into my jeans and sweatshirt and curled up in my bed, making the split complete: sexual female, asexual male. My sexual self was a persona. It had nothing to do with Elliott. It was a game to play and nothing more. Temporarily comforted by these thoughts, I took a nap.

Yet, Show Trans is not without its humor. DeLine’s text exchanges in “Adventures in Online Dating” are hilarious, both in the moronic questions and comments made by his suitors and his common sense responses. Even the title has its tongue in its cheek, as DeLine refers to himself as a “show trans” as in “show dog.” And as difficult as DeLine’s experiences get, he never wallows or pities himself. His prose is plain and matter-of-fact and has all the more power for that.

Show Trans, then, is an excellent, honest read–true to its author and his experiences and well worth your time. My friend, Matt, would have loved it.