I first became aware of Julie Marie Wade when I read When I Was Straight, published by A Midsummer Night’s Press, which I enjoyed tremendously. This volume, however, apparently preceded it and is being reprinted by Bywater Books, and I’m so happy to be able to give it a bit of a push. Wishbone is an absolutely absorbing memoir full of poetic prose, indelible imagery, and a fractured timeline that makes perfect sense despite its non-linear progression.

Certainly, there are as many ways to recount a life as there are to live it, and none are more wrong or more right than others. Most writers opt for a chronological approach simply because it’s the easiest way to tell the story, involving far less work on their part as well as the part of the reader. The fragments of personality that Wade presents look haphazard at first, but as the book progresses, and we see more and more of them, the pattern becomes clear. It’s like a broken mirror whose pieces have been arranged into a semblance of its former self, regaining its shape the farther back one steps.

If all this sounds like too much effort for a reader to make, it isn’t. The pieces are incredibly creative, with time and character shifts that confuse then dizzy at their verisimilitude once their purpose becomes clear. In “Dreaming in Alpha,” Wade rides the bus with her mother fifteen years before her birth, talking to her about  life, love, and J.D. Salinger, and she meets her grandparents-yet-to-be in “Early Elegies,” dialoguing with a grandfather who died when she was but a child.

But my favorite fragment–the one most fully realized in terms of creativity and relevance to the life in question–is unquestionably “Third Door,” which assumes the aspect of a game show featuring portions of her mother’s (and her) life. Her father is behind Door #1, Door #2 contains a lifelong friend who desperately wanted to be her mother’s husband, and Door #3 reveals her mother and a girlfriend of hers named Lara as they share a sweet kiss watching Marilyn Monroe in “The Misfits” in the balcony of a movie theatre.  Touching, telling, and totally involving.

Indeed, Wade’s mother is never far from the narrative, no matter when or how it’s being told. She’s in “A Life on Land,” contrasting Wade’s love of the water with her own fear of it (which also contains a harrowing, barely-missed gay bashing), “Black Fleece,” which sees the beginning of Wade’s thyroid problem, and “Carapace,” where Wade discovers the concept of death.

The read is short (about 145 pages), but its length belies the punch it packs and the work that it accomplishes. It reminds me very much of Gregg Shapiro’s excellent Lincoln Avenue from last year, though the territories they mine are vastly different. Highly recommended!

I’m still out of breath. I usually have a couple of days to think about a book before I write the review. Due to time constraints this week, however, I didn’t have that luxury and had to finish this one up quickly. Luckily, Dragon Horse War: The Calling is so compelling that I zipped through the last forty or so pages with some time to spare. And I don’t have to think too hard to find praiseworthy elements in D. Jackson Leigh’s first fantasy. Already an accomplished author of many romances, Leigh takes on fantasy and comes up aces.

The Collective, a small governing body, has ruled Earth peacefully for many years, but this time of peace is threatened by an upstart group called The Natural Order and their leader, Cyrus (aka The Prophet), who wishes to supplant The Collective with a religious hierarchy that smacks of evangelical hatred. This threat prompts a Calling from The Collective, bringing First Warrior Jael into the picture. She and her newfound love, First Advocate Alyssa must raise an army of dragon horse warriors to defeat The Natural Order and restore harmony. Can they defeat Cyrus and his followers? Or will the sheer magnitude of their task be too much for them?

Savvy storyteller that she is, Leigh understands that good world-building rests on the cornerstone of character, and she sets up three dandies in Jael, Alyssa, and Cyrus. She does a terrific job of highlighting Jael’s weaknesses as well as her strengths, and turns the First Warrior into an altogether human character who hates the job she must do. Rather than just provide support, Alyssa comes in to her own as a fully-realized character as well. But Leigh’s neatest trick may have been showing the big bad guy, Cyrus, as twisted because of the loss of his family (which we see right up front) rather than some inherent malevolence, making his fall from grace particularly poignant.

I’ve admired Leigh’s prose since her Goldie-winning Every Second Counts, but romances don’t usually come with battle scenes or action sequences, so I approached the first one (trainee warriors bonding with their dragon horses–a particularly tricky process that sometimes ends up in incineration) with some trepidation. I needn’t have worried. It was well-paced, perfectly timed, and even featured a tremendous toasting of a trainee that allows Jael some great character moments at the funeral pyre. And the climax where the warriors take on The Natural Order is even more breathless.

So, even if fantasy isn’t quite your thing, you should give this a try. Leigh’s backdrop is a world you already recognize with some slight differences, and the characters are marvelous. There’s a villain, a love story, and…ah yes, “thar be dragons.” 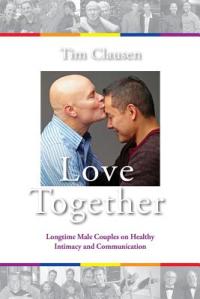 Ryk and I took a gay cruise a number of years ago, and during the large mainstage show that first night, the emcee took a poll of the audience asking how long the couples on the trip had been together. Several rounds passed before finally one last couple had their hands up. They’d been together over fifty years. The emcee called them onstage and did a short interview, asking them what the secret was for being together for that long. One man leaned down to the microphone and said, “Two words: yes, dear.” The advice for longevity in Tim Clausen’s Love Together isn’t that succinct or that easy, but the flavor is there.

Clausen’s role as interviewer is to ask questions, and get out of the way as his couples respond. And respond they do, with deep thoughts, blithe assumptions, and heartfelt honesty. Clausen gives these men their forum and stands back as they deliver no holds barred answers to some thoughtful and insightful questions. Clausen does not interpret, roll-up, or summarize their responses which, depending on your viewpoint, is either the book’s chief asset or its biggest flaw.

By giving you the interview alone, Clausen removes himself from the equation and allows each couple to bring themselves to you without that extra added layer of participation, making for some very honest and unvarnished portraiture of exactly what makes these relationships tick and why. To me, this is invaluable because it allows the voice of each couple to come through loud and clear so that when Byron Roberts (of Byron and Dennis) talks about throwing one of his fits, I can hear him doing it, or when Eric Marcoux (of Eric and Eugene) talks about losing a partner of sixty years, I can feel his heart breaking. That’s the writer in me, for nothing interests me more than characters.

That said, I would have enjoyed a postscript from Clausen summarizing what assumptions he has made from interviewing these terribly forthright and brave gentlemen. We get some of that in the introduction, but the clinician in me wanted more at the end.

However, that’s absolutely minor carping from a reviewer. What you need to do is simply dig in and experience these forty-four lives and how they have come together and stayed together for amazing amounts of time. The similarities will become apparent, as will the differences. Make no mistake, this is an important book if for no other reason than the lack of others like it on the market. And it is even more important as it’s largely in the words of the men who live these lives. Highly recommended.