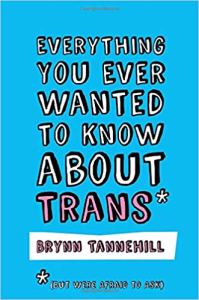 Everything You Ever Wanted to Know About Trans (But Were Afraid to Ask) walks the reader through transgender issues, starting with “What does transgender mean?” before moving on to more complex topics including growing up trans, dating and sex, medical and mental health, and debates around gender and feminism. Brynn also challenges deliberately deceptive information about transgender people being put out into the public sphere. Transphobic myths are debunked and biased research, bad statistics and bad science are carefully and clearly refuted.

My book enables any reader to become informed the most critical public conversations around transgender people and become a better ally as a result.

When I started writing for print and online publications, I had no idea where it would lead. I certainly didn’t imagine I would be good at it or enjoy it enough to do it on a regular basis. Four years and over 250 articles later, people started telling me, “You should write a book!”

The problem was, I had no idea what the book should be about. My articles tackled a multitude of different topics; despite having written hundreds of thousands of words, there wasn’t enough material on any one topic to write a full-sized book. The articles themselves tended to be about issues that were either hot topics in popular culture about transgender people, or issues that I thought needed greater exposure and education.  Other articles were dedicated to busting the myths about transgender people that I saw cropping up repeatedly.

In the summer of 2016, it finally dawned on me that there was a unifying thread between most of what I had written: almost all of it represented things people should know about the transgender community. Some of them were things people should know because the public was asking about it. Sometimes the material was stuff people needed to know because of deliberately deceptive information about transgender people being put out there. Sometimes the articles covered things the public really should know, but that no one was talking about.

Thus, when I looked at what I had written over the past five years, there were articles that covered Trans 101 and Trans 201 topics, as well as articles covering the relationship between transgender people and politics, law, medicine, mental health, religion, feminism, gender studies, sex, sexuality, and even the military.

In short, what my articles had in common is that they provided what people need to know about almost all of the most important issues facing the transgender community today, and that I had more than enough material available to accomplish this.

Brynn Tannehill is a leading trans activist and essayist, and has written for The New York Times, The Huffington Post, Bilerico, Slate, Salon, USA Today, The Advocate, LGBTQ Nation, The New Civil Rights Movement, as a blogger and featured columnist. 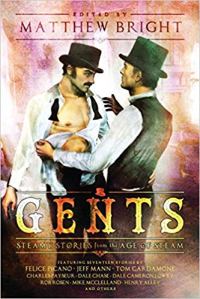 You may suffer from the modern notion that “Victorian” is synonymous with “repressed” or “puritanical” and therefore view a volume of M/M erotica set during the Victorian age as purely fantastical. Matthew Bright in the introduction to his Gents: Steamy Stories from the Age of Steam alludes to this perception by citing the frequently retold (but apparently incorrect) idea that the hyper-prudish Victorians went so far as to cover up their naked piano legs. The truth, as he rightly notes, is both less and more than is generally supposed (I mean Queen Victoria herself had nine children). While perhaps not publicly sex-positive, privately the Queen’s loyal subjects were much more adventurous; and this holds true for same-sex relations—the same era that witnessed Oscar Wilde’s trial and imprisonment also saw back-alley mollyhouses.

Thus the stories in Gents are heavy on the (sexual) fantasy, but less so on the fantastical: only a few have any overt fantastical elements, the most obvious being Jeff Mann’s “London, 1888,” which stars his vampiric alter ego Derrick Maclaine, and Bright’s own contribution, “All My Oceans of Blood and Ink,” narrated by Bram Stoker. In others the fantastical is only implied: for example, “Mr. Okada and his Calotype Camera” by Claudia Quint may or may not feature a Japanese yokai. Also, any reader expecting an anthology purely of steampunk erotica, based on the subtitle, will be disappointed. (A natural assumption, given that Bright has edited a volume of steampunk stories already: Clockwork Cairo: Steampunk Stories of Egypt.) In addition to the aforementioned “Mr. Okada,” with its interest in the emerging film technology, three stories may be classified as steampunk: the aptly named “The Blacksmith’s Son” by Katie Lewis, Charles Payseur’s “Luc Orphelin and the Hodag of Rhinelander,” and “Steam in Antarctica” by Matthias Klein.

Overall, the stories remain true to the historical era: “The Whipping Master” by Dale Cameron Lowry, set in a British boarding school, is a typical example. As might be expected, stories of (depraved) noblemen and their servants/low-born trade may be found: “Hiraeth” by Rhidian Brenig Jones and “The Romp” by Dale Chase, both fine examples, open the anthology. But subsequent writers in Bright’s anthology explore other aspects of the Victorian world: British colonialism provides the setting for two stories (“Mombasa Vengeance” by Mike McClelland and Kolo’s “On a Passage to the Queen’s Jubilee”), and even the nineteenth-century fascination with spiritualism provides the impetus for “Progress be Damned” by Rob Rosen.

Interspersed among these seventeen modern tales, Bright incorporates extracts from three Victorian pornographic works: Sins of the Cities of the Plain by Jack Saul, as well as the better known Teleny and My Secret Life, both by Anonymous. The first purports to be a true account of a “mary-ann”—a Victorian hustler—the second has been ascribed variously to Oscar Wilde and his circle, and the third only to a `Walter.’ As an added bonus, Bright includes 22 period photographs as illustrations, a further enhancement; certainly these extras should put to rest the modern notion of Victorian repression. Bright’s aim “to curate a collection that was both arousing but also grounded in the real history of a time that holds a deep fascination” for him succeeds: the stories are well written, at turns entertaining, even thought-provoking; and the sex is varied, steamy, and thoroughly enjoyable. This volume satisfies on numerous levels.