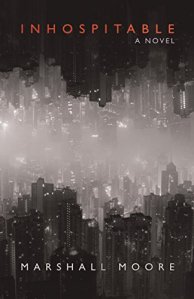 I’m a huge fan of Marshall Moore’s work. When I heard he had a new novel called Inhospitable coming out soon, I had to get the ARC. I had no idea what it was about, and I don’t even think it had a cover then, but it went on my Kindle the second I got it. As the “A” in ARC stands for “advance,” I knew it would be a bit before it released, so I reluctantly put it aside, met some deadlines and read a few pressing books I’d promised reviews of, but this was always at the back of my mind. As serendipity would have it, I picked it up and finished it the very day it was available. And I was not disappointed.

Lena Haze and her Eurasian husband, Marcus, are expats newly arrived in Hong Kong from North Carolina. Marcus has inherited a property in the heart of the city but the can’t sell it due to the terms of the inheritance. He stays behind to pack up their American life and sends Lena to Hong Kong to oversee the renovation and turn it into a boutique hotel. She begins the project with the help of Isaac, the gay son of a local couple who are investing in the hotel. Her organizational skills, however, are nothing compared for her talent for sensing and seeing ghosts. As Isaac tells her, all buildings in Hong Kong are haunted, and she finds this true. However, her building has a more malignant, dangerous spirit than most. Moreover, there’s a reason for that. And she has to find out what it is to protect not only their investment, but their lives.

No one, and I mean no one, does disconnect and urban anomie better than Moore. He’s proven this both in short stories and his novels, Bitter Orange and An Ideal for Living, but the malevolence he conjures up in Inhospitable is at the forefront rather being a general feeling appended to his well-constructed plots. From her search for contractors to her preparations to meet her investors, Lena cannot be more lost. Yet, as untethered from her U.S. moorings as she is, she manages. She copes, and Moore does an admirable job of portraying her external successes as well as her internal failures. This is even reflected in the title. Her haunted hotel may be inhospitable, but no more so than her surroundings. Or her head.

Her sidekick throughout most of this is the son of her investors, Isaac, a Hong Kong resident on leave from a British university. His relationship with his parents is a difficult one, and not just because of his homosexuality. It’s also the subject of the novel’s most interesting twist. Her actual partner, Marcus, is only seen in the last third or so of the novel and although he may provide Lena some emotional support, he’s not much good with the spirits. In fact, it’s his surname that’s causing the haunting, but to say more would be getting into spoiler territory.

So, what we have with Inhospitable is a smart, neatly-plotted, and absolutely absorbing haunted house story the likes of which you probably haven’t read before. Non-traditional and quite satisfying, it’s the creepiest book you’ll read this year–but I mean that in the best way possible.