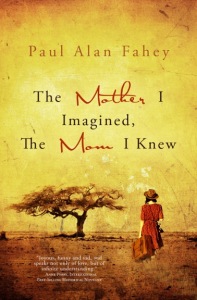 Among gay men of a certain age, Patrick Dennis’s Auntie Mame and the film of the same name with Rosalind Russell is a real touchstone, so Paul Alan Fahey and I aren’t alone. In my house, everything stopped when the movie came on TV. My mother, though, was the one rapt. I enjoyed it too, but the look of wonder in her eye once the camera swept around that first Beekman Place party was magical. She wanted to be Auntie Mame, and I wanted to be Patrick. Of course, I’d be a better actor–talk about a low bar. But Fahey was the lucky one. He lived the childhood I wanted.

Fahey calls his collection of fiction bridged with autobiography a hybrid memoir, and that’s as good a term as any. What this is, though, is a character study–every bit the Reader’s Digest Unforgettable Character piece Patrick Dennis references. The blend of fiction and memoir is seamless even though he labels each clearly. It all works together in one wonderful gestalt.

Mary Eileen Smith is, to put it mildly, a free spirit. Her situations are precarious, her jobs are temporary, and her quirks are innumerable. That she appears in Fahey’s fiction would be inevitable. Parts of her are probably in every female character he’s written, and by the time this memoir is finished, you’ll know her well enough to spot her in Fahey’s other work, no matter where she is. The blend of fiction and memoir works well because Fahey is able to write from her point of view. From “Wheel of Fortune,” a short story:

Roger shakes his head and walks on. He complains of the cold, and Felicia tries to ignore him. She wonders again about other moms, imagines them lining kitchen cupboards with yellow oilcloth, alphabetizing spice racks. She could be home now working on the bright, blue material with the sailboats and kites. She’d started cutting the pattern for his shirt last March. Roger was so excited then. Felicia thinks by the time she’s finished, he will have outgrown it.

Later, we find Fahey sorting through his mother’s belongings after her death and finding said pattern, of course unfinished.

The larger problem with character study is one of momentum, but Fahey provides us with a logically sequenced trajectory of their lives both together and apart. Though it doesn’t have a plot, it moves with grace and assurance. What is fiction and what is memoir? Fahey signals which is which with clinical fairness, but I suspect the lines are even more blurred than he realizes. No matter. The result is a terrific piece of writing, by turns poignant, funny, and altogether absorbing. And it’s a lovely tribute to Mary Eileen Smith.