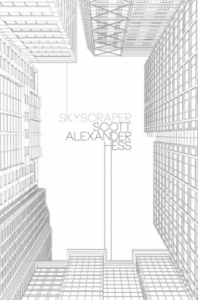 Atticus is a Manhattan architect badly in need of a creative renaissance. He won his current job with his first few successes in the industry but has been coasting for a while. Atticus meets Tad, a dom top with a Fight Club jones, at a leather bar. In between bouts, Tad leads Atticus deeper into the BDSM world. In this sexual awakening, Atticus finds his skills returning and soon wins an important new design project at work. Working closely with his client, Victor, Atticus discovers some disquieting rumors about a past relationship Victor had with Tad and has to find out whether or not they’re true.

Skyscraper could have been a torturously complicated book, brimming with metaphor and pretentious literary devices, with much room for rumination and a sub-plot or three. But part of its charm is that it simplifies the whole subject of midlife–or at least midcareer–crisis to a bare bones, nearly transparent narrative everyone can identify with as it hints at the individual complexities beneath.

The prose isn’t flat, but by the same token, it doesn’t go out of its way to set a scene. Similarly, the tone is dispassionate and reserved, Atticus telling us about his white hot passion instead of letting us get too close to it. That would normally come across as passive, but Hess’s choice of detail and constant ear on his voice prevent the character from slipping in that direction.

Being fond of and accustomed to the work of Jeff Mann, I thought the BDSM was a bit mild. That puzzled me at first. Hot, yes, but I expected more explicit sex and longer passages (yes, that was intended). However, the more I considered the author’s choice, the more sense it made. It’s certainly in keeping with the dispassionate tone, and the domestic breeziness of leaving casual notes for Atticus as to what kinky position Tad should find him in when he got home rather than addressing him directly adds yet another layer of removal. With all its inherent dispassion, however, it’s not a distant read. Atticus has a distinctive voice, and his willingness to plum the depths of whatever relationship he can have with Tad is well told.

Skyscraper is a little wonder of a book that packs a great deal into a small package, and it will leave you thinking about the relationship between success and failure.