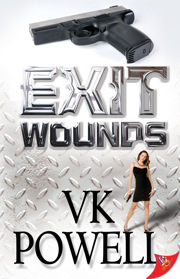 Nothing helps a good cop story like verisimilitude. In order to follow the sometimes intricate plot and web of clues, you need a firm, authoritative voice that oozes assurance. And that’s what VK Powell provides in her sixth book, Exit Wounds.

Loane Landry is working a gun-running case in Greensboro, NC with her informant, Abby Mancuso. Unfortunately, she’s also falling in love with her — a move that winds up just as you’d expect it to. Abby is working undercover inside the house of the crime family under suspicion, and when the place is blown up, Abby gets injured. Trying to rescue her, Loane is injured as well. She goes to the hospital to recover while the family spirits Abby away to recuperate in Florida. Loane grieves for the woman she believes is dead, but Abby suddenly reappears in Greensboro at the family’s behest, managing a strip club that serves as a front for the gun-running business. Can Loane and Abby work together to solve the case? More importantly, can they resume their relationship before they kill each other?

As mentioned in the intro, Powell’s voice is magnificent–its authenticity powered by her time spent both on the beat and in supervisory capacities on the force. And that veracity comes through in not only Landry’s terse dialogue, but also her cop-centered interior monologue as she tries to decide whether or not to let Abby back in to her life. You can tell Powell’s been at the station, because she has a marvelous feel for how cops speak to each other as well as outsiders.

Plot? Powell hits the ground running with the explosion at the crime family’s house and never looks back. Her sense of pacing is impeccable, the action only slowed for some heartfelt soul-searching before we’re back to planning, deceiving, and executing. And though Loane and Abby are well-drawn and totally believable, Exit Wounds is in danger of being taken over by a “minor” character, the streetwise yet vulnerable Vi. Vi is, by turns, an urchin and a take-charge gal who becomes the first one Loane is able to trust after being hurt by Abby and her colleagues. Their exchanges are priceless and well worth the price of admission. Vi becomes very important to the story in a couple of other ways, though. But I wouldn’t spoil the fun.

Powell’s prose is no-nonsense and all business. It gets in and gets the job done, a few well-placed phrases sparkling in your memory and some trenchant observations about life in general and a cop’s life in particular sticking to your psyche long after they’ve gone. After five books, Powell knows what her audience wants, and she delivers those goods with solid assurance. But be careful you don’t get hooked. You only get six hits, then the supply’s gone, and you’ll be jonesin’ for the next installment.

It never pays to be at the mercy of a cop.