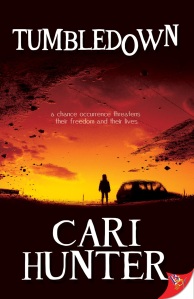 You never know what you’re going to get with sequels. The best ones continue the story, deepen the characters, and allow you to come away with a sense of growth. The worst ones reek of imitation and make you forget why you liked the first one so much. And then there are a whole range of in-betweenies that start off great but lose steam quickly, as if the author forgot what the point was. Not so with Cari Hunter’s excellent Tumbledown, which takes the main characters from Desolation Point and puts them back in danger.

Alex Pascal and Sarah Kent have healed, physically at least, from their last encounter with the Church of Aryan Resistance, during which Sarah killed the organization’s founder. That leaves his son–as dangerous as he is angry–hungry for revenge. Alex and Sarah have relocated to a small town in Maine, living their lives as best they can with one eye over their shoulders. A newspaper article about a birth Sarah assisted with, however, draws the attention of their pursuers, and the game is on again. The game turns out deadly for one of Sarah’s co-workers, who is killed as a warning. Things go even worse when Sarah is arrested for the crime, putting the burden on Alex to find the killer before he finds them.

Even though this is a continuation of the Desolation Point plot, this is an entirely different sort of thriller with elements of a police procedural. The first was grittier and had more of an Us v. Them feel due to the fact that it was just two women being hunted in the forest. In this installment, ancillary characters are brought in, but Hunter is able to maintain the reference points of isolation, deprivation, and danger in ways that depart from the first one. Sarah’s incarceration is told with an incredible eye for detail matched only by Alex’s efforts to get her released so they can track down the culprit. And Hunter’s heroines are very well-drawn here, richer and deeper than the last time around because of the experiences we’ve shared with them.

But the characters and the elements wouldn’t mean a thing without the tension of Hunter’s action scenes, which are flawless. Other thriller authors (yes, I’m looking at you Patterson and Grisham) could take lessons from Hunter when it comes to writing these babies. Twists and turns and forgotten or unconventional weaponry along with pluck and spirit keep me breathless and reading way past my bedtime. I can almost imagine Hunter as sweating and out of breath as her heroines once she writes her way out of the set-ups she conjures.

But can she do it again? Will there be a third installment featuring these characters? My gut says she should stop now and not go to this particular well too often. Still, a third book would be welcome if it didn’t stretch the reader’s credulity. While not exactly left open-ended, there are directions she could go that make perfect sense. And Hunter’s not afraid to change it up. Let’s wait and see. In the meantime, enjoy this fine thrill ride. But don’t start it at bedtime.