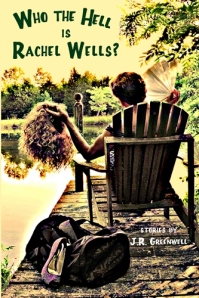 From the blurb on the back of J.R. Greenwell’s Who the Hell is Rachel Wells?, you might assume the eleven short stories inside consist of a bunch of Southern stereotypes thrown together for largely comic effect, overdrawn and overbroad. Though there is some of that, the wonderful cover is more of an indication of the subtlety inside. With its muted tones and mysterious figure in the process of either donning or removing his drag gear, it speaks to the beautiful contradiction of Southern life.

The oversize caricatures definitely make their appearance in the title story, which leads off the book. We never get to find out exactly who Rachel Wells is, but we see the strife her makeup and wig case causes as it’s picked up by a suburban mom and her little gay son, who hand it off to a straight trucker and his wife who, in turn, throw it out of the window after using part of the drag to hold up a convenience store, where it’s caught by two gay boys just learning the art of drag. Winning, witty, and wise, it’s a great start.

Drag is, of course, a feature in many of these stories, but nowhere is it funnier and more up front than “Silver Pumps and a Loose Nut,” which sees Daphne opening for her hero and mentor Stella during a run in Daytona. Daphne desperately wants to mimic Ursula Andress emerging from the sea in a string bikini as in “Dr. No,” a goal she actually achieves despite several episodes of mistaken identity, one aborted date with a closet case named Chuck, and the theft of Stella’s prosthetic leg. You ‘ll have to read it to believe it.

And that goes for the two straight suburban couples Greg and Erica and Dave and Joan in “Out of the Closet,” starring Paul Lynde’s chair. Really. It’s a red velvet chair given to Erica by an uncle who swore it was once owned by Paul Lynde. What happens when you sit in it? Well, let’s just say that watching the football game is a very different experience when Dave tries it. And when Joan does, she finds herself wearing the pants in the family as opposed to the apron.

“The Scent of Honeysuckle,” “A Colony of Barbies,” and “Spaghetti Kisses” don’t bear the same stamp of humor, but they’re just as deft in handling character as the other stories, as is “Learning to Sashay Like Rupaul,” and my particular favorite, “Watch Me Walk,” about Hal and Robert, two older men who find each other and the courage to express themselves at the assisted living facility they’re in.

Greenwell has a talent for creating immediately recognizable yet slightly weird around the edges characters, and he puts them through some wonderfully silly paces as well as some heartbreaking ones. His prose is admirably restrained, conveying a great deal yet never sounding overwritten. But it’s his characters that shine and sparkle like sequins in the spotlight. If you’re looking for a light read that has some substance behind its humor, you’ll hardly go wrong with this collection.