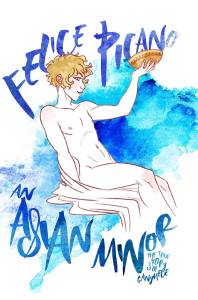 When you listen to audiobooks on a regular basis, as a listener you start to find performers you love. Before you know it, when you’re looking at the lists of audiobooks, you’re searching the listings not by title or author, but by who performs the audiobook, and then reading the blurbs of the books they’ve done. Finding a new and awesome performer is like finding a new author, and in fact absolutely leads to just that: finding new authors through the performer.

I have a trio of performers like that. Barbara Rosenblatt, Jane Entwhistle, and Jason Frazier. Every time I go looking for a new audiobook, I quickly search the three out to see if they’ve got anything new, and when they do, it jumps to the top of the list for consideration.

So, you can imagine my joy at finding a new Jason Frazier. In and of itself, that was a fine, fine thing. He doesn’t narrate, he acts. His voice acting is so great I’ve twice now purchased audiobooks for which I have already read the books physically, and listened to them as a second read-through. To be clear: I nearly never re-read. But Jason Frazier doing Steve Berman’s Vintage? And Gavin Atlas’s The Full Ride?  There was no resisting, and it was a joy to revisit.

Now, add to that the realization that this new book narrated by one of my favorites is a novella from Felice Picano, and all hesitation was gone. I’d clicked before I’d even read the description. I had it queued up for the next dog walk, and in the space of two days I was done.

An Asian Minor: The True Story of Ganymede is a very small class of narratives: mythology retold with a clever and consistent voice. Quite a few times while I was listening to the story, I caught myself thinking of Mark Merlis’s An Arrow’s Flight, but where Merlis crafted a unique contemporary hybrid of the myth and a modern world, Picano instead does stick to the time period in question as Ganymede tells his story, but it is told now, by the immortal in the present day, with all the colloquialisms and long-view wisdom the eternal and immortal young man has gathered since.

That conversational voice, written so cleverly by Picano and given such charm and insouciance through Frazier’s performance, is magic in a bottle. Or, well, an earbud.

As Ganymede sets us straight on what really went down from the time he was born, receiving a troublesome destiny, this breezy tone delights with amusing asides and clarifications of many a mistake in the retelling of the modern myth: most centrally, Ganymede insists, the notion he was somehow some innocent doe-eyed youth with no idea of the powers at play around him. Picano’s Ganymede is nobody’s fool, and indeed knows that when one has a destiny writ large, the best way to play it is to try to turn large into huge.

It’s also telling that in Picano’s prose, and with Frazier’s voice, this story puts Ganymede on an even playing field with the gods who would tempt and curry favor of him. Yes, he’s a youth, but he’s no fool. And these are, after all, the Greek gods who are by no means infallible themselves. As everyone around Ganymede starts to see perfection in the beauty of his form, Ganymede refuses to give up trying to keep what control he might have. This is a Ganymede in search of as grand a destiny as he can cram into one vague prophecy. He’s smart, and wily, and willing to go toe to toe with multiple gods as he entertains offers, and then risks and gambles for the next—hopefully better—thing to come along. Matching wits with multiple gods, the story of how Ganymede came to be the chosen of Zeus is told with a delightful twist or three along the way.

An Asian Minor: The True Story of Ganymede isn’t a long audiobook, but the energy and talent packed into the piece grabs attention. The recollections of his smart and sexy immortal had me laughing multiple times, and in Frazier’s capable hands the words simply sprang to life.

If you’re looking for a short, engrossing, and not-just-a-little-bit sexy audiobook about the foundation of the ultimate Sugar Daddy relationship, look no further. Ganymede awaits.