Life provides some interesting juxtapositioning. While reading His Seed, I was also working my way through a box set of Hammer horror films on DVD, those wonderfully cheesy mid-sixties campfests starring Vincent Price, Christopher Lee, Peter Cushing or–glory of glories–all three. Among the choicer morsels was Twice-Told Tales, an adaptation of three Nathaniel Hawthorne stories, including the root (see what I did there?)  of plant erotica, “Rappacini’s Daughter” (1844). Hammy, plummy, busty, lusty, and OTT, it was a perfect complement to Steve Berman’s superbly twisted collection.

Apparently, this volume grew out of a dare between Berman and designer extraordinaire Matt Bright, who took Berman’s groaner of a title as an artistic challenge. Having inspired the incredible cover you see above, Berman had to put out a call and come up with the goods. Fourteen brave souls responded with tales ranging from lyrical to pornographic. Sometimes in the same paragraph.

Proving right out of the gate that this isn’t your garden-variety (see what I di–okay, I’ll stop now) collection, M. Arbon’s “Ship in a Bottle,” details the affair between a plant-based alien life form named Redleaf and the human who rescues him from the pocket of a 129-year-old coat. That may not be the most normal scenario here, but it’s in the top two.

One of the most creative pieces, and the only one that doesn’t imagine plant-based sex is L.A. Fields’s “King of Fruits,” which sees Perry, who lost his sense of smell and taste in college, in a heated affair with Art. Part of their foreplay consists of Art describing in gory detail the taste, smell, and texture of the most disgusting foods Perry can find for Art to consume. Century eggs. Corn smut. The meat of the story concerns a durian fruit, and I’ll just stop there.

Also of note is John Linwood Grant’s “The Jessamine Garden,” which basically queers the aforementioned Hawthorne tale, setting the romance in a poison garden cultivated by one Julian St. Claire, who entraps a young, wounded Mexican-American war vet. It’s wonderfully entertaining, both in terms of homage and on its own merits.

His Seed, then, may not be everyone’s cup of Miracle-Gro, but those who seek creative, literate short fiction should definitely give this a try. From alien plant forms to durian fruit to anally-puckered orchids, this book has a little bit of everything. Except Hammer Horror’s conception of Rappacini’s poison plant: 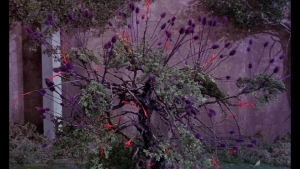 Now, that’s what I call a bush.