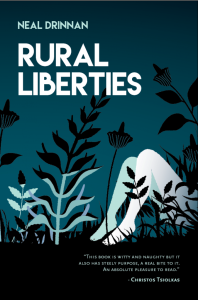 Rural Liberties begins with the death of Rebecca Moore, the most beautiful and talented girl in Moralla, New South Wales, Australia—“jewel of the Sapphire Coast”—a fading seaside town of 3500 people, 350 km south of Sydney, 550 km northeast of Melbourne, “somewhere on the way to someplace else.” The questions surrounding her death—why was she on the Princes Highway in the pouring rain at 4 AM, all but naked, with drugs in her system, and traces of semen on her?—are never answered to the satisfaction of her fellow townsfolk: instead, they provide the catalyst for everyone’s subsequent downward spiral into debauchery and enlightenment.

Before her untimely death, Rebecca had nursed dreams of leaving Moralla by starring on Aussie Diva, singing “Don’t Cry Out Loud” by Melissa Manchester. After Rebecca’s death, it falls to Briannah Saunders (the second most beautiful and talented girl in Moralla) to audition for Hot Sista, Australia’s longest running reality TV show, and thus place Moralla on the map. Briannah’s quest to accomplish this objective (working with and against Reece Martin, the creator of the Hot Sista franchise) is one of the major narratives of this novel.

Entwined in these two major strands are numerous other sub-plots, which are much more serious in nature, even if presented in a humorous fashion. Andrew Pritchard, consumed by guilt for his role in Rebecca’s death, spends his time building memorials to Rebecca and haunting OutoHere.com, a website devoted to people trying to kill themselves. Fifteen-year old Saul (Briannah’s younger brother and Maxine’s son) grapples with his sexual identity in episodes that are simultaneously cringe-worthy and laugh-out-loud funny. Summer Rae (arguably the most mature and self-actualized individual in the novel, but then she isn’t from Moralla) joins the staff at Rural Liberties and puts Tasmin and Guy (and their teachings) to test. Reading to the end is the only way to find out who finally ends up on top. So to speak.

Despite its beginning, Rural Liberties is no mystery, but rather a biting send-up of TV pop culture and its promise of instant fame, small-town gossip, baby boomer/Gen X/millennial (take your pick) entitlement, and 21st-century morality (or lack thereof). With its short chapters, satiric wit, and sensational story, it is the perfect summer beach read.