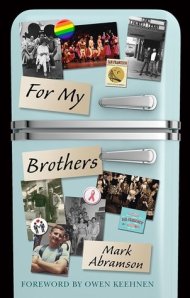 “For My Brothers” is currently unavailable

Whatever the losses recently felt by publishers, bookstores, and established authors as a result of the internet revolution in book making and book selling (a.k.a “the crash”), one thing is certain: it has also opened wide the gates for many who seldom if ever thought of themselves as writers to produce books and get them out there.

One result is that LGBT books, especially memoirs and autobiographies, have now proliferated as never before. They were distinctly minor also-rans in more heady and established times. Among these new authors and their books, unquestionably the most intriguing have been by people who were not writers but instead grocery store owners, venture fund capitalists, appellate court judges, sailors, mobsters, ballerinas, and social workers.

Mark Abramson and Ron Williams are typical of this new kind of author. Williams spent most of his life as a printer, often for gay magazines and newspapers in San Francisco. He has since become a talented photographer and has turned writer for this, his first book. As his title tells us, he was born in the city, and he spent his earliest years, his youth, his gay coming out years and most of his gay life there. Abramson arrived in his early twenties from rural Minnesota and rapidly found work in Guerneville, S.F.’s gay resort area. After some time, he returned to San Francisco and spent most of his time either working in gay bars or putting on various fundraisers, parties, shows, and street fairs all arising from his bartending work. In the past few years, he has put out seven novels, so he too is a newish author.

The two men are about a decade apart, so we get almost a half century picture of gay life in San Francisco beginning in the late fifties when Williams first began haunting what the teenager figured out were gay venues, parks, bars, alleyways, streets, etc. Abramson’s book overlaps in the 70’s and 80’s and goes right up to 1996.

Their backgrounds are also quite different and could almost be said to represent two basic ways of growing up gay in the second half of the twentieth century. Williams, as this title also tells us, was a “sissy.” He came from an Anglo-Saxon/Irish family which had lived several generations in the West, and he visited relatives including his mother’s gay uncle in Montana. His parents and especially his mother were deeply homophobic, but besides that, they were physically, mentally, and verbally abusive to the boy. Like many of us, Williams sought and found an easier, more loving and tolerant gay family away from home. He never really looked back, until now, for the book.

Abramson grew up on a farm and had a solid, well knit, apparently loving family who supported his coming out despite how early it was. They seem to have been helpful and loving toward him throughout his many ups and, when they eventually arrived, through his downs too. Both men are good looking, intelligent and sociable. Life being exactly what it is, that means that the two men have had rich, full, and, for the most part, pretty good gay lives.

This is an important point to be made, because while mainstream publishers love books about LGBT people with insuperable problems and almost insurmountable difficulties because they supposedly make for great reading, younger people who pick up these two books will learn how wonderful life can be for rather ordinary people, people like themselves. So Abramson gets it just right in his book title: For My Brothers. He’s not only addressing his many past and mostly lost gay “brothers,” but also his current and future brothers.

Also keep in mind that neither Ron Williams or Mark Abramson were ever particularly rich, famous, beautiful, or celebrated. Their faces were never on magazine covers, and they made no appearances on television shows. Contrarily, neither were they ever infamous criminals or notorious douchebags. However, for gay history, they are better than academicians because they lived the life and now they have written about it.

Because of his “secondary” work of putting on “Men Behind Bars” and other money-raising parties and shows two decades later, Abramson also came into contact with many such entrepreneurs as well as various celebrities. He even became friends with some of them, but they are of the Sylvester and Edie the Egg Lady variety, not the Donald Trump, Angelina Jolie kind. This is refreshing and fun to read about and besides consolidating identity, it provides an undeniable stamp of authenticity on these books that money can’t buy.

Williams’s book is structured as two halves. The first is the autobiographical one from the time he is a child throughout his middle teen years. It moves from some early forays into neighborhood parks like S.F.‘s Golden Gate, where he had his first glimpse of two men masturbating, on through his years as a not-quite runaway working as a waiter among gay men and living with two older guys and checking out the gay scene around the old Embarcadero. His visits to his middle-aged gay relative at his ranch in the west also has its moments–just before familial religion and homophobia destructively enter into the equation. One of the great ironies of Williams’s life as a “sissy” is that he refused to “check the box” declaring his homosexuality when he was drafted into the Armed Forces. He wanted to prove to himself and everyone else that he wasn’t a sissy. But from Basic Training on to his assignment in Germany, he was surrounded by gay guys, and he and his army buddies indulged in German and Dutch gay life with every weekend pass they got. And then, when Williams returned to the States and had to find some task to do for the few months to the end of his enlistment, he found work for the U.S.O. theatre–putting on musicals. The Army de-sissyfied him all right.

The second half of San Francisco’s Native “Sissy” Son consists of essays about people and places in early gay life: the early years and the homophobic reactions to gays at Russian River, for example, or the intricate and sometimes hilarious cops versus cruising guys games at Land’s End Park, or his brief stint as a porn model and much longer guise as a printer for the Bob Mizer model mags and then for the B.A.R. and S.F. Sentinel. Probably my favorite moment is when he and his hippie boyfriend decide to publish a little newsletter titled, The Organic Morning Glory Seed Message: A magazine for natural living. That goes so well, it then becomes a sort of precursor to the Whole Earth Catalogue. It is fascinating reading and the fun, love, and good times he had as a young man almost compensates for his rough, unloving, earlier life.

Abramson’s book is more or less chronological and twice as long. The author covers a wide span of some of the best gay years that I recall visiting San Francisco, when it seemed the party would never end. A modest man with few apparent ambitions, Mark’s looks, smarts, and charm got him involved in co-producing some of the coolest, funniest, and biggest parties and shows of the time–Men Behind Bars, to begin with, Mr. San Francisco Leather, the Folsom Street Fair, and it also connected him up to Leather Daddies, the Imperial Court, etc.

He details the people he worked for and worked with, the singers and comedians, his boyfriends and lovers, his sometimes fleeting connections to the nascent gay media– all in colorful anecdotes and moments. Everyone he knew was important to him, and he seldom has bad things to say about anyone, although he doesn’t mince words when he does. If some, like Jane Dornacker and Al Parker get more space, it’s because he was closer to them. Toward the end of the book, he questions why he is a survivor. But his book is the answer. A good gay life is its own, and now our, reward.

Abramson concludes with a long list of people he knew who died between 1982 and 1995. It takes up thirty-one pages. I knew many of those same people, but somehow it wasn’t at all depressing to read their names: Bob McQueen, Crawford Barton, Robert Pruzan, Mike Muletta, etc. It feels like the mixed emotion of the Vietnam Memorial in D.C. or an Honor Roll.