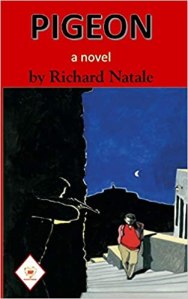 I first ran across Richard Natale a few years ago when I edited some of his work for Bold Strokes–Cafe Eisenhower, Junior Willis, and Love on the Jersey Shore. One facet of all three books I enjoyed immensely was Natale’s characters. They’re always interesting and complex, but they also consistently make the tough decisions and stand up for the right things. That’s especially important for a murder mystery, which Pigeon, Natale’s latest, essentially is. However, that’s only the starting point for this richly detailed and well-told story.

American artist Yancy Gallagher has been invited to lecture at the same Italian university at which he took his degree a few years before. As he gets settled in, he reads of a local murder. Certain details convince him the unidentified dead man is actually Rudi, his ex from when he was a student there. His search for Rudi’s killer takes him to some “corporate” (read mobster) types who run a circuit of clubs Rudi was managing. Yancy, Rudi’s mother, and an understanding police detective combine forces to bring Rudi’s killer to justice–with some surprising results along the way.

As mentioned before, Natale’s characters are always worthwhile but here he’s transported them to a lovely Italian town. Although it does not become a character itself, it lends an undeniable air of languor to what is usually a harried and perilous situation in a more urban setting. Those metro murder interviews are conducted with wisecracks and threats, but Gallagher’s investigation is much friendlier, often taking place over a nice glass of red in some al fresco setting. That does not mean those inquiries are any less tense or driven, just that they’re more polite on the surface. And, perhaps, just a bit deadlier because of it.

And the mystery itself is well worth your time. Initially straightforward, Rudi’s fate becomes more and more questionable with each revelation until Natale has you not knowing what to believe. The twists and turns are intricate but also wholly believable, and they never serve the plot over character. Moreover, it never feels rushed or incomplete. Compliments also go out to the cover designer. The artwork perfectly conveys the slightly surreal environment.

Pigeon, then, is a beautifully layered mystery full of well-drawn major and minor characters. You won’t see the ending coming, but it will make perfect sense once you’re there. Highly recommended.