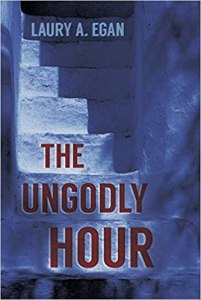 Pandemic or no, spring approaches. The days are getting balmier, at least here in Colorado, and the afternoons are getting longer. After the reading rush of judging the Ferro-Grumley awards this year, I was looking forward to a bit of a lazy spring/summer read, and Laury A. Egan’s latest mystery, The Ungodly Hour, did the trick nicely.

Dana Fox is a New Yorker temporarily ensconced in Mykonos, teaching a photography workshop to tourists. She’s been doing it for a number of summers, but this year is different. Mykonos has been invaded by church-going anti-gay protesters, and a serial killer targeting gay men is on the loose. Dana accidentally snaps a photo of the murderer, who ransacks her darkroom. Despite Dana’s new relationship with a hot policewoman named Cybele, both she and her students are in danger. Maybe even from themselves.

Egan evokes Mykonos well, and the setting pervades the story, giving it an airy, sun-kissed aspect you don’t usually find in mystery thrillers. This serves the plot well but also echoes the assignments she gives her photography students about light and dark and finding the subject within the shadows.

The romance with Cybele develops quickly, perhaps too quickly, with the definite promise of a new beginning for both of them at the end of the book, but whether or not their relationship can weather life on another continent remains to be seen. It would be an interesting premise for a sequel. I would also like to have seen more of the cross-carrying Christian militia, maybe even from the first. The killer is appropriately dark and Egan provides a nice red herring or two to muck things up.

So, this breezy little thriller requires a longish afternoon, some cheese and olives with a bit of ouzo (or grappa, if you prefer), and a light breeze blowing through your backyard. Reads like this are what summer’s all about.