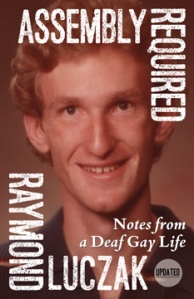 Raymond Luczak has written and edited over a score of books: fiction, non-fiction, plays, and poetry. His eighth book, Assembly Required, first published in 2009, has recently been reissued in a second edition. Inspired by his landmark essay “Notes on a Deaf Gay Writer,” originally published in Christopher Street in 1990, Assembly Required comprises eleven autobiographical essays that have been expanded and updated by Luczak. Many of the themes will already be familiar to Gay men—coming out, first to oneself, then to others; leaving home to find one’s “logical” family; musings on what does, or does not, comprise Gay culture—but all of these are also cast through the prism of being Deaf.

Curiously, I felt that as I read Luczak’s odyssey, that I was also reading my own: I too grew up in the Midwest in the seventies and eighties (not in a small Michigan town, but rather one in Wisconsin), and we graduated from high school the exact same year; he moved to Washington, DC immediately thereafter to attend Gallaudet University, but I didn’t move to DC until I entered grad school, five years later. By the time I made my first trip to (the now closed) Lambda Rising bookstore, it had moved from the U Street location that Luczak describes to Connecticut Avenue, north of Dupont Circle; and instead of riding cross-town via bus, I remember boarding the Metro. Despite these superficial differences, it is clear that we both found ourselves and community through music (via such artists as Lipps, Inc.; Culture Club; Bronski Beat) and books.

However, our life-paths diverged after college: I moved to DC and remained there, and he subsequently moved to New York. And whatever commonalities we may share, his life has been permanently shaped by being Deaf. As one example, when discussing the impact of movies on Gay culture (“Musings of a Deaf Culture Junkie”), he notes that Deaf people experience Gay icons differently: instead of memorizing vocal inflection and accent from iconic movie actresses, they memorize gesture and body language. Nevertheless, even I found myself nodding in agreement with his observations concerning the backstabbing nature of Deaf culture, because I have witnessed the same things in Gay culture (“Daggers in Our Hands“); ditto during his musings on what exactly constitutes Deaf culture—and who gets to decide? And while I too have witnessed the progression from manual typewriters to computers to iPhones described in “My Technological Evolution as a Deaf Person,” Luczak demonstrates how these technological advances specifically have leveled the playing field for him, both professionally and personally.

The final section of his book contains several essays of a highly personal nature. “Lousy Show with Great Production Values” offers some keen insights into the literal (and figurative) drama provided by the Roman Catholic Church. In “Leaving 49 India Street,” Luczak describes his first year living in New York, and the impact it had on him as a person and a writer; while “Weighing the Bacon to Go” traces the development of his relationship with his father, which is almost always a fraught subject for Gay men.

One may think that Luczak’s audience might be even more niche than that of most Gay writers, seeing as it is a subset of a subset of the greater culture. However, these essays deserve the widest possible audience, not only for their informative awareness into being Gay and being Deaf, but especially since Luczak describes being “an eternal either—both outsider and insider—in the Deaf world”—a familiar feeling to many Gay men in the Gay world.