Acres of Perhaps: Stories and Episodes – Will Ludwigsen (Lethe Press) 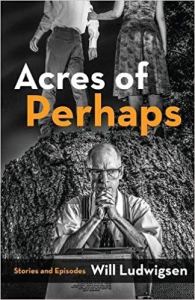 Although the books I review are mostly queer, occasionally I’ll publish a review of something that’s only tangentially queer or not queer at all. But as this space is dedicated to queer lit, any deviation has to be really worthwhile, and Will Ludwigsen’s Acres of Perhaps: Stories and Episodes fills that bill.

Ludwigsen’s imagination is incredibly fertile, and he is at his best when taking well-known events, situations, or people and warping them out of orbit. The title story is a perfect example. The tale of David Findley, chief writer of a fictional Sixties horror anthology television series called “Acres of Perhaps,” proves a strong start to Ludwigsen’s collection. This aspirational “Twilight Zone” has become a cult classic, studied in universities, and generally revered by rabid fans. But auteur Findley has a secret life, including a wife and in-laws, which catches up to him and snatches him back from life as a writer in L.A. I don’t want to present any spoilers, but this story of alternate lives and parallel time lines captivates with its elegance and poetry.

The “Acres of Perhaps” TV show also appears between stories in the form of episode synopses, and though the book is only five stories long, each one of them packs an incredible punch. “The Zodiac Walks on the Moon” reimagines that serial killer’s correspondence to startling effect, but the next three stories are the longest and the ones which have lingered longest in my memory.

“The Leaning Lincoln” starts off as if it’s going to be a talisman story about an object that causes harm to anyone possessing it, but it becomes much more than that as it refocuses from the boy possessing the poorly-made Lincoln figurine to the fate of the figurine’s maker and how the boy’s father (whose evil only matches that of my own father) induces him to commit a horrible crime. This one made me shut down my Kindle after I was finished and do a lot of thinking and staring out the window. “Poe at Gettysburg” is a fascinating bit of revisited history featuring Edgar Usher Poe as President of these United States dedicating the cemetery at Gettysburg with that famous address. But it’s no less fascinating than “Night Fever,” which transplants Charlie Manson and his Family to the disco era, putting Manson in a white cowboy suit and a truck bomb in the middle of Studio 54. Oh, and both Steve Rubell and Truman Capote make appearances as well. That it does so in an epistolary format, comprised of book and magazine excerpts and transcribed interviews, is even more interesting.

Maybe Acres of Perhaps captured me so because it cleaves so closely to my own spheres of interest: Poe, serial killers, Sixties TV, and shitty parenting, but whatever the reason, Ludwigsen’s talent for imagining and creating the perfect vehicles for those flights of fancy is unquestionable. It’s the best non-queer book I’ve read all year long. Highly, highly recommended.