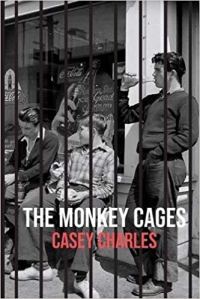 Sixteen-year-old Tommy Cadigan is caught in the throes of desire—not for his girlfriend Pam, but rather for Kurt McKellar, the linebacker of his high school football team, as it turns out. With no one to confide in but his best friend Freddie Udall—an effete bookworm, who is even more picked on than Tommy—he sneaks out one evening to the Julia Davis Park in downtown Boise, Idaho, to the “Monkey Cages,” a pathetic “zoo” that serves as a cruising spot, especially for older men trying to pick up teenage boys. And it is there that Tommy runs into (literally) his best friend’s father, an elder in the local Mormon church and pillar of the community.

If that were not enough, into this maelstrom of adolescent hormones, unexpected knowledge, and moral complexity enters Tommy’s football coach and history teacher Martin Williams, a young, hot, twentysomething Korean War veteran, recently discharged from the military on a “blue ticket” for being a homosexual.  Tommy soon becomes infatuated with Coach Williams, and initiates a liaison that Coach Williams resists at first, but to which he inevitably succumbs.  Unfortunately for them both the 1950s “Pink Scare” has reached the American heartland, and they both become enmeshed in a scandal that soon overwhelms Boise.

Casey Charles’ The Monkey Cages takes us to this earlier, more “innocent” time.  Set during the Boise homosexuality scandal of 1955 (which made the cover of Time magazine, as noted by Charles), The Monkey Cages is only part fictionalized oral history; the greater parts are coming out story, romance, and courtroom drama.  Actual historical figures from the scandal make cameos, or are referenced to (if Wikipedia is to be trusted), but the main narrative focuses upon Tommy and Coach Williams.  Given the time period, it is almost a foregone conclusion that the story will not end well for the principal characters:  Tommy escapes relatively unscathed (as the obvious victim in this scenario, despite his clear agency), but Coach Williams suffers serious consequences, despite (perhaps because of) Tommy’s impassioned plea in court that their love is among the best things that has ever happened to him.

And, to be honest, this lies at the crux of my own ambivalence with this novel:  beautifully written, a gripping story with a sympathetic, attractive protagonist—who is engaged in a romantic relationship with an underage teenager, who moreover is his student.  Yes, the age difference is not that great between them (just a few years), yes, they were caught in the momentum of the larger witch hunt, yes, times were so much different then, with so many men forced to live closeted lives, if only they could have lived more honestly….but this essential fact remains, and I for one cannot simply elide over it.

To Charles’ credit, both of his protagonists at least are aware of the ethical quicksand they are standing on, however much they may disagree with the moral stance taken against them.  And Coach Williams, having already lived through a military court marshal, knows full well the ramifications of another court case.  Despite this knowledge, both choose to be honest about their relationship.  Of course, Tommy’s relationship to Coach Williams encapsules the major tension exposed by the scandal:  on the one hand, homosexuality was perceived as a mental illness needing treatment; on the other hand it was a criminal act leading to juvenile delinquency (with older homosexuals preying on younger, more vulnerable boys) and therefore must be punished.

Despite my reservations concerning this novel, there is no doubt that the “Pink Scare” ruined the lives and reputations of many men, even those who engaged in sexual acts with consenting adults; and that there is always a high price to be paid for honesty.