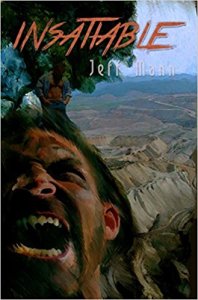 I have a special relationship with Jeff Mann’s Scots vampire, Derek Maclaine, as I took a story Derek appeared in for my Bears of Winter anthology (plug, plug), “Snow on Scrabble Creek.” His origin story appears in Mann’s Desire and Devour, which is entirely devoted to this multi-faceted character. However, I’ve been one of the fans telling Jeff his wampyr deserves a longer, more complete narrative, and that’s exactly what he delivers in Insatiable.

Derek’s latest haunt is the hills of West Virginia, where he lives with his mortal mountain cub, Matt Taylor. Matt’s brother, a staunch opponent of Alpha Coal, a ruthless mining operation, is found dead of a suspicious heart attack, and Matt goes on in his stead. Derek and his coterie of delicious cubs come along for the ride, taking on the Man with the help of Derek’s oldest and dearest friends. They encounter a strong foe in Alpha Coal, made even stronger by their employment of a demonic presence, a “Lovecraftian blob.”

If you’ve read Jeff Mann’s work before, this hits all the required notes: food, sex, magic, and love of nature. He has carved out a comfortable corner of the gay literary world, and his fireside tales–for I can’t imagine them being told any other way than by a hearth with the hearty scent of beef stew and biscuits on the air–never fail to entertain.

In Peter Jackson’s “Fellowship of the Ring,” Samwise Gamgee has a marvelous speech in which he talks about the “great stories, the ones that really mattered.” Mann writes those sort of stories: elemental, full of lust and evil and good and wonder. Big emotions writ even larger. And it’s a marvelous feeling to throw yourself at stories like that, smiling with the impact as you crash against those big feelings. But for all that immensity, the characters retain their humanity (well, they’re vampires and werewolves and witches, but you know what I mean) and have the good of their fellow man at heart as they pursue their goals. And in these dark days when our rights and regulations are in danger of being rolled back by a government no longer in control of itself, we need stories of success in which we can take comfort so we can get up and fight again tomorrow.

I can’t think of a more perfect way to enjoy Halloween than with a cup of steaming pumpkin spice something-or-other, a dog at my feet, and this tale of bravery and heroics in my hand. Well met, sir. Well met indeed.