The Girl on the Edge of Summer – J.M. Redmann (Bold Strokes Books) 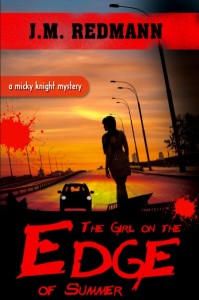 Just as reliable as Fay Jacobs, although in a totally different genre, J.M. Redmann has long been a favorite of mine. Her Micky Knight series is one of the finest I’ve read, both in terms of the mysteries themselves and the characters. Micky’s breakup with long-time lover Cordelia was traumatic to some of Redmann’s fans, but those downvotes are only proof positive how close Redmann’s readers feel with Micky. Her latest, The Girl on the Edge of Summer, is a solid addition to the post-Cordelia series and one that might finally see Micky Knight ready to move on with her life.

In this pair of cases, Knight attempts to find information for a mother to ease her distress over the death of her young daughter, who killed herself because an older boy she had sexted with was threatening to make those pictures public if she didn’t have sex with him. Eddie isn’t hard to find, but he also turns up dead after a violent confrontation with Knight at the mother’s house. Even worse, Knight is suspected of the murder. Her other case involves archival work to solve the hundred-year-old murder of a member of one of New Orleans’s wealthiest families.

At their hearts, both cases are about vengeance as closure, maybe serving as examples to Knight that vengeance rarely closes anything and only leaves everyone open to more damage. Knight is on a different emotional edge this time, since she finds out Cordelia is now back in New Orleans. They haven’t yet run into each other, and I don’t think it’s much of a spoiler to tell you they don’t meet here, either. But for an absent character, Cordelia is all over this book. That’s okay. Nine books in, Redmann knows the secret to a successful series is to make it dynamic, changing it up so it doesn’t get stale for anyone–especially the writer. Part of the enjoyment of this bunch of books for me is Micky’s slow climb back to something approaching normalcy after she and Cordelia call it quits. Is their story over? Doubtful. Am I waiting to find out? Desperately.

In the meantime, we get to enjoy some well-plotted mysteries, some life-and-death rescues, and some despicably seedy characters. Redmann works through her action scenes with precision and balance, never letting them drag or sputter. The YA characters here are also well-drawn. They sound like teenagers, not forty-year-olds, and they act age appropriately as well. But at the heart of it all is Mickey–mostly smart (but sometimes stupid), looking forward without forgetting her past, and trying to reassemble her life with some bent and abraded puzzle pieces.

I’ll certainly be reading the next installment. For maximum pleasure, you should start at the beginning of the series. But this also works well as a standalone, so you can read this one and pick up the others later.

One response to “The Girl on the Edge of Summer – J.M. Redmann (Bold Strokes Books)”