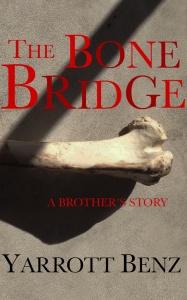 Brotherly bonds are like any other family tie. Depending on how they are applied, they can either support or strangle. Often, they do a bit of both, and that’s never been better exemplified than in Yarrott Benz’s The Bone Bridge. By turns family history, memoir, and medical thriller, Benz has dug deeply into his intense, thorny relationship with his ailing older brother, Charley, and unearthed nuggets of wisdom and sacrifice that are as amazing as they are inspiring.

Yarrott and Charley seem to have the quintessential brother relationship–hateful and loving, simultaneously. However, when Charley is in high school, a new wrinkle develops. Charley is diagnosed with aplastic anemia, a condition that occurs when the bone marrow stops manufacturing new blood cells. Charley receives his red and white cells from the Red Cross, but his only source for blood platelets is his brother, who must undergo a four-to-six hour centrifuged procedure called a pheresis twice a week to keep Charley alive–an act of unselfish devotion that links both boys in some extremely destructive ways.

Benz’s charitable act (not that he gets a whole lot of choice in the matter) slaps several more layers of complexity on an already troubled relationship. The boys are quite different outside the medical issues, and one gets the feeling that there would always be problems between them even if Charley had his health and did not have to depend on Yarrott for his life. Benz looks at this situation with an absolutely unsparing eye. His candor is terrifying as he explores how keeping his brother alive actually threatens to destroy parts of both their lives. The fact that Yarrott is gay is yet another complication. For many of us Benz’s age, coming out also meant moving away to avoid conflict with the family. This option is closed to him for the foreseeable future, adding even more pressure to an already charged adolescence. To make matters worse, when Yarrott’s sister, Angela, comes out, the family does not take the news well, driving Yarrott deeper into the closet.

As far as Yarrott’s parents are concerned, everything must be sacrificed for Charley. His father spends their savings as well as his pension on medical procedures, his mother devotes her time to him, and they even conspire to keep Yarrott pinned to Charley’s side by hiding correspondence from colleges so that he’s forced to go to university in his hometown. From glee and heartbreak to remissions and relationships as well as relapses, Benz’s story is compulsively readable. He balances science, philosophy, and family drama with the assurance of a pro. But Benz never wallows in pity or plays anything close to the victim card.

The Bone Bridge, then is probably one of the finest memoirs I have ever read; one that tells its own story while making you wonder what you would do if you were in his shoes. Highly, highly recommended.