I had fully intended to get this roundup in April since that’s National Poetry Month, however, a cracked tooth and other of life’s unplanned events interfered. Better late than never. And I have so much material, I have to split this into two parts. Get your credit card out and be ready to click on the links, because there are some marvelous collections here. 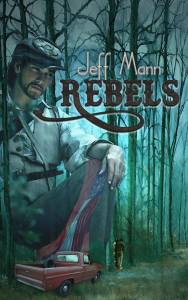 I can’t think of a better way to kick things off than with one of my favorite writers, Jeff Mann. In his latest offering, Rebels, Mann shows his Southern roots–though, to be fair, he rarely strays from them, which is part of his appeal for me. He stays in the Civil War vein of his novels Purgatory and Salvation, offering up poetry suffused by the War Between the States. Rather than enter the battle wholly, however, he has one foot firmly planted in the present, a dichotomy reflected in the cover, which shows a Confederate soldier above a pickup truck. From the delicious elegy of “Buckwheat Cakes” to the beautiful imagery in “Snow Quilt,” Mann occupies his niche with a comfortable assurance that makes his work solid and dependable. A fine example of this is the opening to “Turner Ashby Monument, Chestnut Ridge”:  Turner, you’re hard to find, nineteenth-century/hero lost in the twenty-first-century sprawl/of Harrisonburg, Virginia. We’re using/my husbear’s fancy iPhone to track you,/past McDonald’s and malls, aluminum-siding/housing muddle, one contemporary/abortion after another. The Daughters/have managed to save a few woods yet;/the spot where you died, bullet through/your Fauquier heart, is shaded still with/thick green oak-shade, though Chestnut/Ridge has nary a chestnut left, all brought/low by a foreign blight. No one else does what Mann attempts, and though I would normally exhort a writer to get outside his niche and try something new, for Mann that would represent a betrayal of sorts. I love that he stays where he is, respecting his traditions and his heritage. Long may he do so. 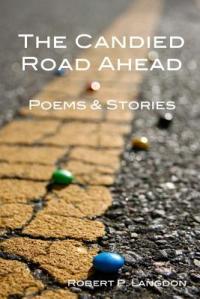 Growing up gay and Catholic is not easy, as witnessed by countless books by men and women who have done just that. Drawing inspiration from “Grimm’s Fairy Tales,” Brooke Shields, John and Yoko, Diane Arbus, adolescence, care of elderly parents, and shopping malls, Langdon creates worlds that are heartbreakingly accurate–as pointed as they are occasionally humorous. His experiences are, perhaps, no different than ours, but he has a particularly warped point of view. Sometimes the warp is for comic effect–most often in the stories/monologues at the end of the collection–but that warp pokes its scaly head up for some deliciously awkward and telling moments in his poetry. I’m thinking of the poignancy in “My Father’s Naked Body” and “Life Support,” or the oddly erotic “Dentist,” or his ruminations on the differences between gay men, “Gay Like Me” or “Alone Still.” Langdon’s images are crisp and his intent straightforward, as in this snippet from “The Past is Hunting Me”: The past is hunting me./Blooms in my old room/like a snail./It leaves cum smears/on the mattress./Feasts on fallen/lint from my navel./Redecorates and makes use/of every stained corner.It follows me to work/like a ratted dog. This volume is the first I’d heard of Langdon, and as far as I can determine, it’s his only collection, but he’s a poet to be reckoned with and you should definitely seek this one out. 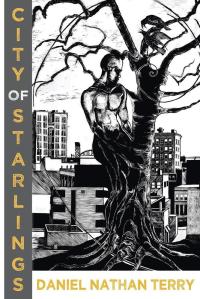 I first encountered this wonderful poet through his last collection, Waxwings. I was mightily impressed with his voice, and his latest release, City of Starlings, is no less impressive. Although the bird and nature motifs run through nearly all the poems here and are givens both here and in Waxwings, this seems to be more concerned, on the surface, with death. The more I read, however, the more I believe the majority of these pieces concern themselves with the brevity of life–a concept far different than that of death. This is clear throughout poems like “City of Crows,” “The Deer,” “Only the Jays,” and “Since I Married the Painter.” However, Terry also visualizes a nature that exists despite the presence of man, as typified in “Cycling Through the Graveyard” and this bit from “Cycling to the Sea, You Realize”: most of it exists without you–/the green loom on the saw grass marsh,/the warp and weft of the dark bayous,/the oyster beds’ gray skeins. Little of it needs/you–not the harried, scuttling ghost/crab, nor the egret embroidering its light/onto the brackish water while you, pedaling/by, have just the time to pull this thread/of memory. Whenever I read Terry’s work, I’m always left amazed and a bit awed by his use of language. I can hardly wait for his novel, The Guardian.

For those who don’t know, glosa poems open with a four-line stanza (usually a quote from another poem), then four ten-line stanzas each ending with a line from the original quotation. I love the structure of this form because it really challenges the poet to tie theme and vision to a tight format and it enables her to extend the work of her influences and pay homage. Amber Dawn meets all the challenges of this form brilliantly, engaging with such wonderful forebears as Gertrude Stein (“Chicken Dance”), Lucille Clifton (“Story Book”), Adrienne Rich (“Queer Grace”), and Christina Rossetti (“On and Up”). This form is ripe for staking a claim and taking territory for you own, and Dawn does just that in pieces like “The Revered Femme Bottom,” “Dirt Bag Love Affair,” and my favorite of the bunch, “Vagina Cantata” (which glosas award-winning poet Rachel Rose’s “American Pageant”). Here’s the second stanza: You’re one of us, gobble-gobble, we accept./Are you ready to rule your nympholepts?/Trust your idiosyncratic gut and follow/these step-by-step instructions./Don’t be nervous, men would rather/buy your used panties than pay child support./After all they deserve, just deserts, desert ride/the long hot hot long long hot desert ride/A mirage is mostly water vapor, play your fluid part/singing and swinging to A Cowboy’s Sweetheart. Dawn’s vision is so powerful that I’m anxious to see what she can do outside this structure.

And speaking of homage, Jessica Jacobs’s latest release, is named after one of Georgia O’Keeffe’s most famous canvases and deals not only with O’Keeffe, but with her husband, photographer Alfred Stieglitz. Subtitled A Biography in Poems, this audacious collection does just what most biographies set out to do–chronicle a life so thoroughly that the reader actually feels like an intimate of the subject. O’Keeffe’s creativity and independence shine through in poems wrought of color and inflection. Their titles may seem prosaic (“In the Canyon I,” “Red Barn in Wheatfield,” “Lake George, 1922”, “The Grey Hills”), but those titles hide a multitude of shades. Even “Black Abstraction” is anything but monochromatic: Days my window-propped elbow/turns shades darker/than the rest of me, I would crush/every passing thing–rust-red silos/scrub oaks’ hardscrabble green,/the mountains blue with distance–/grind it to powder I could cut/with this sky’s titanium white/to paint it whole again. But as much as this collection is about O’Keeffe and her vision, it’s also about her relationship with her husband. Pelvis with Distance is an incredibly ambitious work, but amazingly, it fulfills all those ambitions and provides moments where you simply must put the book down and think.

And that’s it for Part I. Next up, we’ll be taking a look at Jim Elledge, Elena Dykewomon and a few others. Until then, happy reading.