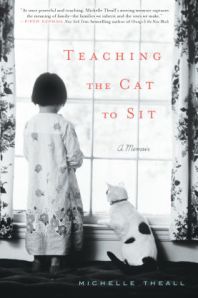 Here in the ever-so-sophisticated northeast, if a gay person speaks of their love for the Catholic Church, mimosas hang suspended a moment over brioche French toast with artisanal lingonberry syrup before someone says, “You’re, like, joking, right?” Followed by, “I mean, you are joking, right?” Peggy Noonan once began a Sunday editorial by suggesting the reader was lazily enjoying brunch as they read. Noonan’s editor reminded her that, in most places of the United States, on Sunday morning, people were in church.

They still are. And Michelle Theall is one of them.

At first, the message of Theall’s memoir, Teaching the Cat to Sit, seems to be: hey, look, us gay gals are just like you. The book seems written less for Theall’s queer sisters and brothers than for her straight neighbors in Colorado and the church folk she grew up with in Texas. See—I have a beautiful home, just like you. A wife and son, just like you. Just like a real person. We have our troubles, but get a load of the flagstones in the garden and the new flooring in the family room. Gradually, though, as Theall alternates between the Texas past and the Colorado present, the picture unravels. Let me make this clear: Theall herself is the one who unravels it.

As a kid, Theall suffered in a strict Catholic household with a raging, controlling, but strangely inert mother and an obsequious father. She was molested by a neighbor. She was harassed at school, and the harassment followed her home, a home where the word “lesbian” was unspeakable, yea, unthinkable, yea, inconceivable. Meanwhile, in the present, the author suffers from multiple sclerosis and visits and calls from that same mother, who all but ignores her daughter’s partner, Jill, and who still believes that an offense against the Catholic Church is the greatest offense there can be (except for offenses against motherhood, her own in particular).

Then, after a few chapters, something else unravels. Our patience. “Why doesn’t she tell the Church to fuck off?” rolls easily off non-Catholic tongues, especially in urbane gayborhoods. We find it similarly easy to say, “Just don’t invite your mother anymore.” “Tell her to fuck off, too.” But Theall is teaching cats to sit. We are the cats. Cool and brusque and independent, we do not want to put up with Theall’s agonizing. We will sit when we want to. But to Theall’s great credit, she gets us to sit and listen to a story of how the past is never past, how it is never easily cut loose, and how it should not be cut loose. For all the baggage the past drags behind it, we must welcome it anyway through the door of our fabulously appointed Boulder home. In the end, we have little choice.

Not that Theall doesn’t push back against family and church. Teaching is not a tale of wholesale rejection, but it is not a tale of capitulation, either. It is the story of a struggle—an ongoing one that many of us don’t or don’t have to undertake. But Theall and her partner have a child, so they must deal, to take just one example, with school. Catholic school. A Catholic school not “comfortable” having a student whose parents’ relationship goes against the church. Eventually the women remove their son from this school, but it takes much deliberation, much swallowing of anger, and many attempts to educate a priest who the reader can tell right off is not educable. Still, Theall undertakes the process.

A more difficult process is dealing with and educating Theall’s mother. Walking away from a school or a church may be difficult, but cutting off family, though some gay folk claim to do it blithely and confidently, is wrenching for a married woman with a child. Theall throws herself into the breach, supported by her partner, and gains small victories. But this is not a Lifetime special. Mom is not going to suddenly melt. She is a creature of the Catholic Church right to the bitter(sweet) end. She is another cat who must be taught to sit. Our impulse to tell Theall to toss Mom out must be taught to sit. Everybody, just please sit! Theall tells us. Sit and attend a story of women, of women who are not going to change as decisively as a male reader in particular might wish, who are going to take three steps forward, then two back, who are going to hang on fiercely to what they love, whether the reader understands why they love it or not, who will not break with the past in a way that gives a reader a cheap thrill, but who will work hard to integrate past and present.

If you are tired of hearing that it’s all about process and baby steps, maybe this is not the book for you. According to Michelle Theall, mess and contradiction and process are here to say. They are all that is. The same might be said of family and faith. No jokes this time. You might as well surrender. And engage.

Michelle Theall has written a fine manual for helping you do so.

One response to “Teaching the Cat to Sit: A Memoir – Michelle Theall (Gallery Books)”