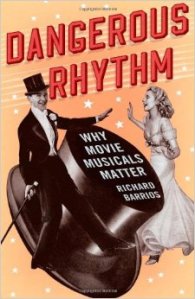 Love them or hate them, movie musicals are a part of the popular cultural landscape and have been since the earliest days of talkies. And they’re part of gay culture, which is why I had high hopes for this title. I was looking for something that put musicals in context with American culture, exploring why some remain popular while others have faded away–and something that wasn’t too dry, with a bit of dish. Barrios’s book, Dangerous Rhythm: Why Movie Musicals Matter, proved to be the perfect way to spend a plane ride.

One of the reasons movie musicals matter is their longevity. You can’t get rid of them. Barrios takes us from the beginnings of Al Jolson’s The Jazz Singer through Hugh Jackman’s Les Miserables, visiting such venerable standards as Singin’ in the Rain, The Wizard Of Oz, Cabaret, and Annie Get Your Gun while bitchslapping Lucille Ball’s Mame and, yes, The Sound of Music. He explores why late-sixties dinosaurs like Hello Dolly and Gigi and Paint Your Wagon were typical of a bloated, festering period in musicals, and he studies the interrelationship between musicals and gay culture.

Barrios knows his subject well and argues convincingly that musicals reflect far more than simply the tenor of their times. Their importance to film and culture is inestimable, both those we have seen so much we’ve internalized, and those we need to seek out. I’m glad I had a pen when I read this so that I could make some notes on musicals to find. One sadly lost to legal complexities is the Sidney Poitier, Dorothy Dandridge production of George and Ira Gershwin’s Porgy and Bess, directed by Otto Preminger in 1958. It should have been a contender, but due to poor choices involving racism and poor luck including a fire that shut down production, it opened to mixed reviews, played once on network television and disappeared, lost in a lawsuit with the Gershwin estate. Hissy, lossy DVD bootlegs remain, only hinting at the grandeur it could have in its remixed, remastered glory.

Barrios’s book is chock full of stories of musicals that should have been, could have been, or were but we’ve never heard of them. I find in order to understand Maurice Chevalier in some context other than the neutered grandfather of Gigi, I should try to find musicals like Love Me Tonight from his rakish Thirties period, in which he picked up Jeanette McDonald as he winked at conventions of the times. Barrios’s style is clear and easy to read, aided by a fine sense of humor and clear boundaries of what he considers good musicals and what he thinks are stinkers.

If you are in the least interested in movie musicals, this is for you. It’s smart without being overly intellectual and has a clear point as well as an interesting voice that gets it there. Recommended.