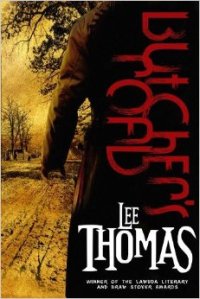 Lee Thomas has always made the most delicious novels from the most disparate of ingredients. His latest, Butcher’s Road, tosses a ruined pro wrestler, Irish and Italian mobsters, a psychotic hit man, and a secret society out to retrieve a stolen relic into the Thomas Mixmaster, folds in Chicago and New Orleans color circa 1932, dashes of same-sex longing, and a heavy dose of dread and comes out with a powerful, riveting thriller that will satisfy anyone’s hunger for compulsive reading.

Former wrestler Butch Cardinal is muscle for the mob and witnesses a murder while picking up a package. He flees, taking the package with him. And his boss wants it back. Cardinal tries to lay low in New Orleans, but researching the contents of the package — a necklace with a metal pendant called the Galenus Rose — brings him to the attention of those pursuing him. Can he find the answers he’s looking for without destroying himself and the man he’s just learned to care about in the process?

I wouldn’t possibly spoil the answer to that last question except to say that story gets the ending it deserves and not necessarily the one the reader is looking for. As someone who loves having his expectations countered (in fiction, at least), that’s a bloody marvelous occurrence. But many aspects of Butcher’s Road are bloody marvelous, including the character of Butch Cardinal. Not just a mass of muscle, Cardinal has brains, wits, and an uncommon self-awareness that leads him, rightly or wrongly, to the choice he makes at the end of the book. And as many signals as we’re given that that particular outcome will be the one that happens, it’s still a surprise when it does.

Cardinal, however, is not the exception. All of Thomas’s characters pop. Hollis Rossington, Cardinal’s host in New Orleans, is wonderfully world-weary and matches NOLA’s steamy languidity (if it’s not a word, it should be) perfectly. Paul Rabin, the psychotic hit man whose wife has Alzheimer’s, is also multi-leveled, and the team of Hayes and Brand, members of the secret order looking for the Galenus Rose are terrific supporting players. But really each is his own star.

My only quibbles are incredibly minor. Not all these characters, unfortunately, survive to the finale. Although it’s part of Thomas’s plan–and someone has to go–I found myself wanting them to be part of the eventual outcome. I also found when I got to the end, which sees Cardinal squaring off against the mob boss Marco Impelliteri, I wanted to understand more of why Impelliteri wanted the artifact. We get some of that, but a better understanding would have been helpful in fleshing out his motives and how far he’d go to get what he wanted.

Still, this is small potatoes when compared with the masterful storytelling to be had in Butcher’s Road. If you’ve read Thomas before, you won’t be disappointed at all. And if you haven’t, shame on you. This is a wonderful place to start.