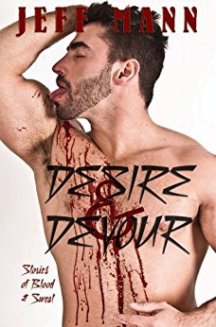 If there’s anything I hate, it’s those damn Twilight twink vampires. Vampires should be men with attitude. Men with purpose. Men with the confidence and surety of the long undead. Men like Derek Maclaine, the Scottish vampire who figures in Jeff Mann’s compilation of Maclaine tales, Desire and Devour: Stories of Blood and Sweat.

This hearty volume of bloodlust begins with “Derek & Angus,” which explores Maclaine’s roots and his love affair with Angus McCormick, the son of a crofter who works the land for his laird, Maclaine’s father. Their bond lasts some thirteen years, always broaching discovery, until one Beltane night when they are making love outside in the standing stones and are set upon by their archenemies, the Macdonalds. Angus is killed in the fracas, and Derek is mortally wounded. He is saved, however, by a Nordic vampire named Sigurd, who makes him one of the Immortals, enabling Derek to take his revenge on the men who murdered his lover.

The longest story in the book, “Derek & Angus” is less a vampire story than a bloody tale of revenge which serves as a base for the further exploits of Derek. And those exploits take him to very interesting places, such as Vienna (the short yet delicious “The Last Crumbs of Sacher Torte”), northern England (“Whitby”) and Rome (“Black Sambuca”). These tales have all the atmosphere and sense of place I’ve come to expect of Mann, and each one deepens Maclaine’s character.

The rest of the time, Maclaine stays in his new home of America, draining mountain boys dry, sometimes with the assistance of his partner Matt (apparently, Maclaine has taken several human lovers). Of these domestic stories, I particularly liked “Hemlock Lake” and “Wolf Moon/Hunger Moon,” which has Maclaine and Matt in a three-way with were-cub Donnie. And Mann gets unexpectedly political with “Saving Tobias,” an expertly done piece which sees Maclaine giving just desserts to a country singer turned conservative
politician.

And if you’re not, it’s a perfect  place to start.