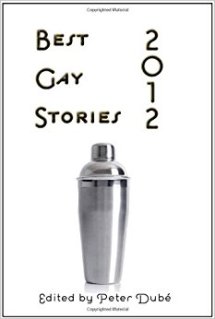 A dedicated follower of Poe, Hawthorne, Melville, and Eudora Welty, I have always admired short stories—both as a reader and a writer. As edited by Peter Dubé, Lethe’s annual collection of short gay fiction celebrates the diversity of voices in our community. This year, Dubé has focused on the many ways in which we yearn, and the result is no less striking than last year’s compilation.

The collection starts off strong with Matthew J. Trafford’s marvelously skewed “The Renegade Angels of Parkdale,” in which Zach, recovering from the suicide of his boyfriend, allows his friends to drag him out to a bar populated by gay angels. Trafford’s sense of humor and irony are in full blossom as we track Zach’s evening, which ends up with him and a new chum named Alar (a word which means “resembling wings” for those of you who don’t do crosswords).

If bars full of angels aren’t to your taste, Clint Catalyst’s hilarious “Sugar Rush” might give you some new fetish material as we’re introduced to the new sexual practice of “caking,” which is exactly what you think—spongy cake fucking with frosting for lube. It gives a whole new (or old) meaning to Twinkie. Our established voices are also evident here, especially with Felice Picano’s achingly wistful “My Childhood Friend,” Jeff Mann’s “Bondage Tape in Budapest,” a frank look at how one couple copes when their sexual tastes differ, and Cecilia Tan’s “Action,” a study of an actor in transition.

None of the stories here play it safe, but these envelopes are pushed with recognizable fingers so as to not alienate or strand the reader in territories too unfamiliar, such as Ian Young’s deft handling of a murder in “In My Dreams I Can Drive,” William Henderson’s breathtaking “Words Between Words,” the changing of a life in Jonathan Vatner’s “191 Days of Active Charles.”

Rightly or wrongly, self-loathing or not, yearning for straight men is a very large part of some gay men’s lives, as evidenced by Elias Miguel Muñoz’s blend of Star Trek and sexual exploration, “The Unequivocal Moon” as well as Loren Arthur Moreno Jr.’s altogether too brief “At This Late Hour.”

But, really, anywhere you open Best Gay Stories 2012, you’re bound to be entranced and intrigued by what’s on the page. This is yet another entry in a fine series that demonstrates not only our diversity but the vast array of talent in our community.