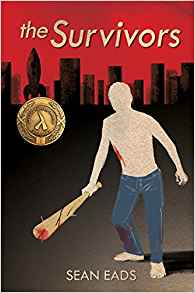 I admire writers who sucker me in, leading me down one path then distracting me while they change direction. That’s especially tricky with science fiction,which has narrow and clearly defined pathways to follow.  However, Sean Eads proves to be a master of misdirection with The Survivors.

Just like the rest of the Earth, freelance journalist Craig Mencken (a nod to H.L. Mencken, perhaps?) has been invaded by aliens. But these aliens are not ray-gun toting, laser-beam shooting critters. Nor is their invasion violent. It’s more passive-aggressive than anything, with the aliens simply using their bulk to crowd into homes, offices, grocery stores and people’s apartments despite owners’ attempts to dislodge them. Of course, a Resistance springs up, headed by Mencken’s ex-boyfriend, Scott, determined to eradicate the aliens by violent means. But then come machines bent on demolishing our infrastructure, and the Earth is in serious trouble.

Eads begins this story with a lighthearted tone:

“The aliens had sex again in my bed last night, making a mess on the walls and ceiling. If I was just renting maybe I’d leave it alone, but goddamnit, I own this place. I also own the food they’ve been eating. A steady stream of televised scientists keeps insisting it’s unlikely they can digest our food, but I’ve looked in my refrigerator and can tell you the aliens handle cold pizza and Coors just fine.”

Fine. I settle back for a giggle amidst the invasion thinking how great this story is going to taste with its tongue in its cheek—and the first quarter or so is pretty damn funny. But the humor is eventually enveloped by a far darker mood. About the time Scott and The Company begin night-time raids shooting, hanging and beating aliens to death with baseball bats, recruiting Mencken in a scary initiation ritual, it’s clear Eads has more in store for the reader than a romp through the galaxy.

And what delicious changes he takes us through. Mencken and his ex-boyfriend morph from cute guys to desperate freedom fighters to resigned invadees as the aliens continue their Ghandi-like takeover. And the aliens, even though they’re the enemy, gain a stoic nobility as they roll over us with bulk and numbers. I can’t tell anything else about the plot for fear of giving things away, but you won’t be disappointed.

Eads’ characters, especially Mencken and the female alien who communicates with him, are deep and fully formed, and his prose can make you chuckle as well as inspire awe and fear. His style is so accomplished, it’s hard to believe this is his debut novel. The concept is unique and his follow-through is nothing less than grand—making trenchant points about the needs of the many versus the needs of the individual, our capacity for violence, and what, exactly, survival entails. And you won’t soon forget the ending.

The Survivors is good fun that winds up being a great read.