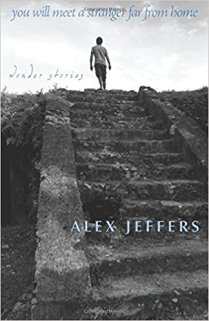 And what strangers they are—from fallen angels to gender-switching brothers to literal faeries to the last old woman in the world. Alex Jeffers brings them all to life in this strangely exotic collection of short stories that amazes as it entertains.

Whenever I encounter one of Jeffers’ stories in an anthology such as in Touch of the Sea or Boys of Summer, I usually read it first because I know I will be astounded, not only by the depth of his imagination but by his ability to make those imagined worlds become real. I also know that I will be reading a story layered with atmosphere and meaning—dense and delicious as a flourless chocolate cake.

Jeffers’ greatest talent lies in creating worlds similar enough to ours to be recognizable yet singular enough to allow anything to happen. Consider “Liam and the Wild Fairy,” an absolutely delightful tale that begins with a boy’s telephone conversation with his father about missing the school bus (which he’s done on purpose because of the bullies). Typical suburban event, right? Only the boy is a budding fairy—the real kind—as is his father. The boy is coaxed from his path home by a wild fairy he encounters, who beckons him to come to fairyland. Does the boy leave this world of taunts and ostracism to join his fellow sprites? Only a spoilsport would tell.

Another of Jeffers’ favorite devices is gender-bending, a hint of which spices “Firooz and His Brother,” which sees Firooz finding a baby abandoned in the forest. Firooze raises the child as his brother, which is fortunate as he’s unable to conceive with his wife. Once his brother reaches adulthood, however, he offers to bear his brother’s child. And does. But the sex-shifting becomes paramount in the wonderfully complex “Tattooed Love Boys.”

This story finds two teenagers, Emma and Theo, in a foreign city and enamored of the local tattoo shop and the fallen angels who run it. But Emma becomes hairy-chested Emmanuel (and sometimes Manny) and Theo is a female Teddy—when he’s not. And when they mix it up with the angels, it’s difficult to predict who will end up with whom. Even when reassigning genitalia, however, Jeffers manages to keep the plot clear and his characters distinct.

But perhaps my favorite story here is “Jannicke’s Cat,” an intriguing tale of the last old woman on earth and a plushy toy she makes for her grandson, inspired by a cat she used to have as a girl. Women have died out on this planet, and all (male) children are conceived in laboratories, reared by male/male couples—a sly commentary on same-sex parenting. This piece has an air of poignant wistfulness and a longing that breaks your heart at the end. Beautifully wrought and rich with character, I read it three times before I finally let go. These were not the only standouts here.

Everything is worth your while, from the whirling dervish saga “Turning” to the change of scenery in “Then We Went There” to the politically exotic “Arab’s Prayer,” you will be astonished at Jeffers’ scope. Savor his flavors.